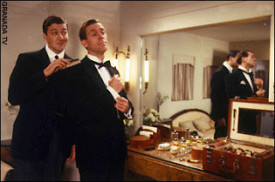 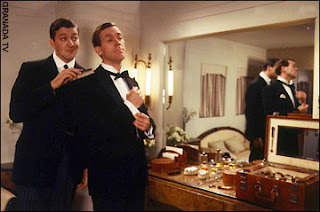 How I’d managed to get to my advanced age without reading Wodehouse is a puzzlement, but I have read him now. OK, not all of his massive output of one hundred books or more, but merely one, Very Good Jeeves, originally published in 1930, and the third in the series about the dapper, ditzy Bertie Wooster and his smoothly wry manservant Jeeves who has such a topper command of “the psychology of the individual.” Ben Elton described Wodehouse as “light as a feather, but fabulous,” and I can’t argue with, or improve upon such a succinct review. Each story is interchangable: Bertie finds himself in a rummy pickle – Bertie devises a ludicrous plan – Jeeves swoops in to save Bertie’s bacon and restore the tickety-boo. The plots are nonsensical and the characters tissue-paper thin but the dialogues are masterstrokes of pacing and wit, and Bertie’s ruminations on Aunt Agatha and other worthies of the martini-classes are often searingly on-pointe. (While reading it, one can’t help but remember Stephen Fry’s and Hugh Laurie’s wonderful performances as Jeeves and Wooster in Granada television’s series from the early 1990s. Photo courtesy of Granada)