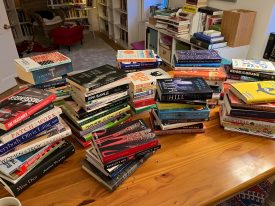 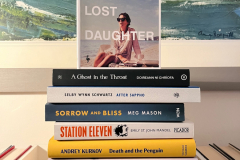 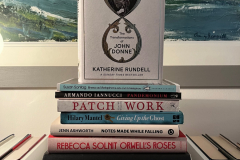 Another year of muddling through despite cancelled travel plans and brushes with the plague. We’ve been and remain much luckier than most given the war in the Ukraine, the UK’s economic collapse, and the struggle of many to simply keep warm. Books (along with the garden) continue to be an essential balm. Travel plans to California were thwarted by Covid but we made it to Corsica, which gave me the opportunity to discover the brilliant Dorthy Carrington (Granite Island). I didn’t manage a writing retreat this year so I’m crankier than usual, but hope to try again next year.

I’m rereading Dorothy L. Sayers, only to revisit the romance of Lord Peter and Harriet Vane, frankly. I could have skipped Five Red Herrings as Vane’s not in it, and its obsession with train timetables drove me demented, though I can recommend it as an effective soporific. I’m currently in the thick of Gaudy Night, my favourite, but it will fall under next year’s tally.

It would be an exaggeration to say I was disappointed in the fiction because I made the mistake of returning to some writers too soon. Despite the high quality (Pat Barker, Elizabeth Strout), some read like more of the same. I suspect some writers, through their own compulsion or with encouragement from agents and editors, are in danger of dipping into one well too many times.

The books that caught and held my attention sit in a specific hybrid sweet spot: the grey area encompassing (magical) fiction and (literary, erudite, almost academic) nonfiction. A Ghost in the Throat, Ní Ghríofa’s “female text” combines the hallucinatory early months in the life of a new mother with her attempt to research the biography and work of an eighteenth century poet. Selby Wynn Schwartz, meanwhile, step-stones through history in After Sappho, with her “capsule speculative biographies” of one glorious artistic feminist to another, sharing names both familiar and deliciously unfamiliar.

My top ten this year are highlighted below in red, and those with an asterisk are recommended, and after much to-ing and fro-ing I decided to choose one top book from both fiction and nonfiction.

Ferrante’s extraordinary The Lost Daughter, one of the best depictions of complex ambivalence surrounding motherhood, just held off Audrey Magee’s The Undertaking, a family saga in pared down prose, Louise Welsh’s long-awaited follow up to Glasgow Noir The Cutting Room, and popular best-seller Sorrow and Bliss by Meg Mason.

In nonfiction, Super-Infinite had stiff competition from Solnit’s lovely Orwell’s Roses, Hilary Mantel’s concise autobiography, Giving Up the Ghost (and I still have to stop myself from bubbling every time I remember she has gone from us), and James Birch’s touching, gossipy Bacon in Moscow. But Rundell (who is already a favourite of my daughters through her terrific tween books) is rising in my estimation toward my dangerous, embarrassing ‘Ali Smith level’ of idolatry. I hear her being interviewed on the radio and even her voice is divine. God help her if I ever meet her in person, I’ll turn into a puddle. It is obvious from the articulate, passionate joy in her sentences that she loves her subject matter, loves history, loves stories, loves life in all its heartbreaking complexity. We have another genius in our midst, my friends, who makes picking up a book feel like an adventure. Who knew I’d find myself enraptured by revisiting that smutty old poet I giggled over in my high school years?

The Book I Gave Up On