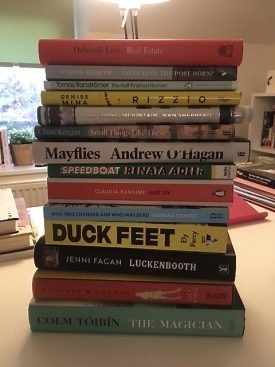 I was already compiling my booklist from 2022 when I realised I had forgotten to post this list from 2021 due to… well, who knows what? Apathy? Melancholy? Forgetfulness? Rage? The Plague?

Almost three years ago, during late February of 2020, I caught one of the last flights out of the USA, having spent fourteen divine days at Yaddo, anxious about the sudden rent in the world’s fabric, but filled with enthusiasm for an ongoing writing project that was destined to hit a wall due to the ensuing intersection of Covid with family health issues. I finally caught that blasted plague while doing the first draft of this list (around ten months ago), but it wasn’t so bad, given what so many others have suffered.

When I look back on 2021, everything blurs into a tangle of homeschooling and gardening. (Yet, surely life had moved on from that? Nope, no idea what I did in 2021. I remember little beyond organising birthday parties for the lassies and the rash purchase of a trampoline.) The homeschooling I could live without (it’s not one of my skills) but I can’t complain about the gardening. The garden, I think (as for so many people) saved me. It’s such a cliche to be saved by nature, but there it is.

Revisiting this list from 2021 has given me time to consider which books have ‘stuck’ and which haven’t. It’s curious (worrying) how many of the titles listed below I can barely remember the details of now. Perhaps if I picked them up, flipped through a few pages, it would all come back. Nevertheless for a good number of them, I know how they made me feel. As you can see, it was a fiction-heavy year, with reliable authors such as Denise Mina, Colm Toibin and Andrew O’Hagan once again coming up to par. I’d put off reading Adler’s Speedboat for a long time, nervous about it failing to live up to its reputation, but I needn’t have been, it was superb. And how had I not known that A Rage in Harlem would be so funny?

I read a lot of 2021’s ‘It’ books, the titles everyone was talking about, and many of them written by women, but when it came to choosing a favourite, so many of them slid off the table without leaving a smudge (it’s not you, it’s me…) unlike the authentic Who Was Changed and Who was Dead by Barbara Comyns, her absolute belter from 1954, which pretty much blew the current smart set out of the water.

One the nonfiction side, I finally (finally!) read The Living Mountain by Nan Shepherd (she’s on Scotland’s fiver for heck’s sake!), and I’m relieved to report it was evocative, almost spiritual.

Now for the stats: of the 90 books read during 2021, 58% were written by women, 41% by men, and 1% by non-binary. As always, an accidental rather than intentional split, nevertheless I found works by our sisters particularly impressive.

If I could be bothered I would take a look at the split between new and older releases but I can’t make up my mind where the cut off point should be. Because I read so much 19th century fiction and classics in my youth and early twenties, I tended to consider anything published in my lifetime as ‘contemporary.’ Given my advancing years, I’m not sure I can get away with that anymore! Only two categories though, wouldn’t cut it. How about three? ‘New’ books, being those released within the last 2 years, ‘modern’ being those from 1920 onwards, and everything prior being ‘old?’ A question for another time…

Despite post-Brexit malaise, the ever-changing occupancy of No. 10, the ongoing war in Ukraine, etc, reading can still feel––simultaneously––pointless and the most important thing in the world.

* Top Fourteen if my arm were twisted!