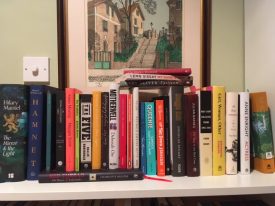 2020, what a year. I’m going to go with the old maxim, ‘if you can’t say something nice, say nothing at all,’ and simply share my year’s reading. Four months late. My life is running behind time. Only 70 or so books consumed, despite the lockdown (I know, I don’t understand that either, but home-schooling may have had something to do with it), but 64% of them by women. My literary sisters carried me through, it seems. As usual, an asterisk indicates a book I liked very much and would recommend.