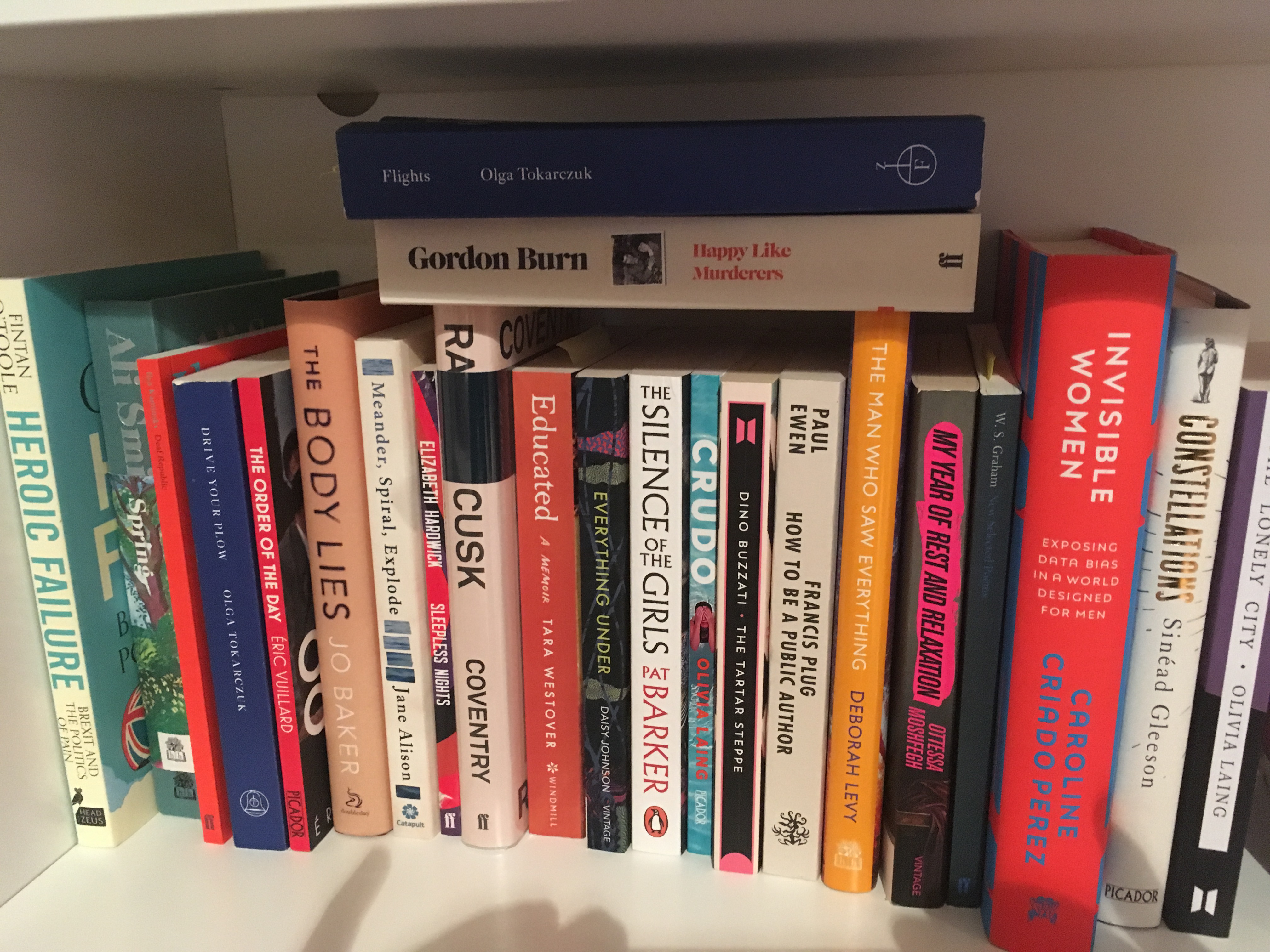 Let’s face it, the reading life never disappoints even if many things in our private lives (like my utter inability to get this first sentence to format properly), and unfolding in the wider world, persist in being utterly crap. During 2019 I discovered the poets Wislawa Szymborska and W.S. Graham, and this alone could define a ‘good’ year. Combined with Alfie, the new addition to our family, it has been a very good year. After mourning the passing of my beloved Dougie and swearing off dog-ownership as too heartbreaking to consider again, I gave in. After all, life can either be shite, or be shite plus a dog….

I didn’t match 2018’s grand slam of over one hundred books, partly because I wrote more and read less. Given how hard I’ve found it to get to the page, I see this dip in consumption as a win. The 79 or so books on the list below (I’ve counted the titles several times and not once come up with the same total…) fell again, accidentally, into a gender split of roughly fifty-fifty. Go figure. Less gratifying is that I’m still not reading enough writers of colour, or works in translation. Do better, girlfriend.

When deciding what to read, I often (lazily) refer to a list of go-to writers—Rachel Cusk, W.G. Sebald, Ali Smith, Kevin Barry, Deborah Levy—because I know they’ll never let me down. But I love adding new literary ‘besties,’ and now I have the works of Olga Tokarczuk, Olivia Laing (gifted in both fiction and non-fiction), Elizabeth Hardwick (I know, I should have read her before now, right?) and Ottessa Moshfegh, to hoover up with fangirl delight. Moshfegh’s My Year of Rest and Relaxation was a particular stand-out—managing to be both heartbreaking and hilarious—a combination hard to pull off and disappointingly rare. And literary bestie Jo Baker wrote another wonderful book, The Body Lies, (after her remarkable A Country Road, A Tree), which again didn’t receive anywhere near the recognition it deserved.

Form. Form is what excites me the most at the moment. Perfidious Albion, The Order of the Day, Flights…. Amazing books written in completely different ways.

Given I spend a lot of time simmering with rage over the continuing madness of Brexit, Trump, and rampant inequality, I don’t whether I should feel resentful or grateful that the books on my list by Fintal O’Toole (Heroic Failure) and Caroline Cruado-Perez (Invisible Women) have kept me on the boil.

And just as I needed some chunky historical-murder-intrique-romance diversion from all the bad news, I finally discovered C.J. Sansome’s Shardlake series set in the late 15th and early 16th centuries. I’ve ploughed through the first four, and I think I’ve only two left to go. I’ll need to find a replacement series of entertaining page-turners pretty sharpish. Sansome and I have very different views on Scottish politics, but I admire his writing enormously. Dorothy Dunnett set the gold standard of this style of literary adventure novel with the Lymond Chronicles and she has yet to be matched. If you haven’t read her yet, run—don’t walk—-to your nearest independent bookstore.

Although I’d heard Gordon Burns’ Happy Like Murderers being compared to Capote’s In Cold Blood as another outstanding example of new journalism, I’d avoided reading it up till now due to its subject matter. It’s a remarkable investigation, (if controversial, due to Burns’s somewhat flexible notions of veracity), into the life of the serial killers Fred and Rosemary West. I highly recommend it—but with hefty trigger warnings. Somehow Burns managed to simultaneously humanise and indict the Wests, though what I found even more horrifying was his forensic examination of the society in which their despicable crimes had been both enabled and ignored. I’ll never forget Happy Like Murderers, and I never want to read it again.

So, what’s next? In 2020 I’ll attempt to read more books written prior to 1950. I’ve become too dazzled by the new and buzzy to the detriment of reading broadly. And second, I must visit my own ‘to read’ pile before heading to the bookstore. Even though I have north of fifty un-read books sitting on a shelf (OK, way, waaaay north of 50, that’s a downright fib, I’m too embarrassed to mention the actual number), I tend to reach for my latest purchase, as if books, like carry-outs, grow cold. After a while my ‘to-read’ pile seems stale—like new clothes I’ve hung in the wardrobe without clipping the labels off—as if thrills are confined to browsing and picking, rather than wearing.

I’m writing this on 31st January, 2020. It’s probable that by the end of today Trump will have been acquitted of high crimes and misdemeanours and I will no longer, apparently, be a European.

Words may be the only thing that lie between us and madness.