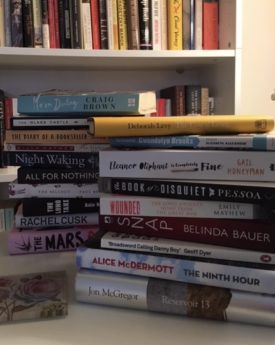 You can tell by the length of this list that not a lot of writing got done in 2018! Oops. Still, I almost hit my goal of reading one hundred books in a year, so every cloud etc…..

As usual, I’ve asterisked those that I particularly enjoyed. Once again I never read enough poetry, and once again it was the poetry that helped me the most. I’ll be eternally grateful for Mary Oliver, Robin Robertson and Helen Dunmore. My gender split errs more towards men than women this year (sorry gals), and, as usual, I’m hard-pressed and a tad reluctant to choose favorites.

Nevertheless… Jon McGregor’s Reservoir 13, Walter Kemposwki’s All for Nothing, and Kudos, the conclusion of Rachel Cusk’s trilogy were outstanding. Paul Beatty’s The Sellout is probably the best book I’ve read recently about contemporary America, far surpassing (for me, anyway) Lincoln in the Bardo.

I read a lot of worthy non-fiction this year, but Ma’am Darling by Craig Brown was a joy, because it made me laugh. And 2018 was year much in need of laughs. (An honorable mention also goes to Geoff Dyer’s Broadsword Calling Danny Boy—a book about a film that’s more fun than the film.)

Elevated to a slot on my ‘in case of fire grab these first’ shelf (drum roll, please!) is Fernando Pessoa’s The Book of Disquiet. It’s been moping on my ‘should’ve read by now’ list for years, and I finally got around to it. I dipped into it like a day book, sipping one entry at a time. Is it poetry? Is it fiction or non? Who cares? With pathos and tender humor, Pessoa perfectly distills the experience of melancholy and insomnia, and for someone like myself who suffers from both, it provided much-needed solace. This, he confirms, is what it often feels like to be alive.