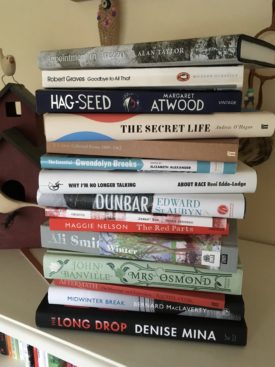 Darn it, one year I WILL read one hundred books!

In 2017 I didn’t even get close. Nevertheless (this is becoming my go-to word, that’s what happens when you read too much Spark), out of the sixty-one books on the list, thirty-two are by women, so although I missed my target by reams, I didn’t succumb entirely to the patriachy. I’ve an excuse, too (don’t we all?). I began a writing project that requires oodles of research, but I haven’t included the many academic and history books I’ve read so far––not because some aren’t worthy of recommendation (they are), but because of a weird superstition that if I share my furtive diggings with the world too soon, l may talk the story ‘out,’ let the magic go.

The news over the past year kept my mood at a roiling boil; concentrating on anything was (still is) bloody hard. Many nights I tore myself from social media and retired to bed, seething, in need of deep book-balm. Sometimes it worked and sometimes it didn’t, and I awoke the next morning just as angry as I’d been the night before. Below I jabber about some of the books on my list that I’ve blessed with an asterisk.

In fiction, Ali Smith followed her wonderful Autumn, with her even more wonderful Winter, a clever twist on A Christmas Carol, and both Margaret Atwood and Edward St. Aubyn contributed to the Hogarth Shakespeare Project with spins on, respectively, The Tempest and King Lear. Atwood’s Hag-Seed had more subtlety––though I suspect she probably rattled the whole thing out over a long weekend––but no-one writes obnoxious characters as well as St. Aubyn, and Megan in Dunbar is a corker. I’m so looking forward to the upcoming adaptation of St. Aubyn’s peerless Patrick Melrose novels starring Benedict Cumberbatch.

When the Scottish writer Nan Shepherd appeared on the new five-pound note, I realized, somewhat ashamed, that I’d never read any of her work. She’s best known for her nonfiction classic The Living Mountain, but I chose to begin with her second novel, The Weatherhouse, and it was quietly marvelous. I intend to read more of her this year. Sarah Perry’s second novel, The Essex Serpent, was heavily promoted in the UK, and I think some readers may have been expecting something pacier and less intellectually and metaphysically taxing based on its marketing. I wanted to enjoy it more than I did, but it reminded me, favorably, in terms of theme and ambition, of AS Byatt. Both central characters are complex and Perry refuses to comply with narrative expectations. Lisa McInervey’s debut The Glorious Heresies was more fun. Though she couldn’t sustain its opening linguistic pace, she’s a writer to watch once she gets her abundant talent under greater control. All the usual suspects turn up on my fiction list: Banville (Mrs. Osmond, it tales guts to do a sequel to a Henry James) Toibin (The House of Names, not one of his best), Mantel, Murdoch, Brookner, Keane, Pym… I can’t stop turning to reliable, old favorites, my psychological comfort food. Sadly this year I finished reading all of Penelope Fitzgerald with her short story collection The Means of Escape. I recommend it as a palate cleanser for anyone baffled by the fuss over “Cat Person.”

I’m trying to avoid choosing favorite novels… but… Bernard MacLaverty’s Midwinter Break is heartbreaking and wry, and Denise Mina’s The Long Drop is superb. Mina is not one of the best crime writers working in Scotland today, she is one of the best writers. Period. The Long Drop proves marketing distinctions between ‘genre’ and ‘literary’ fiction are often nonsensical and can hinder work getting the full recognition it deserves. Mind you, this latest about the Glasgow serial killer Peter Manuel has won almost every award going, so don’t feel too bad for her.

I read some stonkingly good non-fiction in 2017, including Maggie Nelson’s brilliant The Red Parts, Robert Graves First World War memoir, Goodbye to All That, and Reni Eddo-Lodge’s timely survey of racism in Britain in Why I’m No Longer Talking to White People About Race. Alice Mattison’s The Kite and the String is a superb addition to books about craft. Two memoirs written by writers about writers, Greene on Capri by Shirley Hazzard and Alan Taylor’s Appointment in Arezzo about his relationship with Muriel Spark, were especially interesting. Scotland celebrates the centenary of Spark’s birth in 2018, and I’m giggly with anticipation.

I admit it, I’m utterly hypocritical about improvement and diet books: I heap scorn on both the works and the ‘needy weaklings’ that read them…. while voraciously devouring them myself. Afterwards I shelve them in my beloved’s office, so that folks presume they’re his. Given the mess we’re all in, I went a bit overboard in 2017, shuffling about (in disguise) in the self-help aisles looking for something––anything––to temper my temper, my melancholy, my rampant inability to GET SHIT DONE. I found Gretchen Rubin’s Better Than Before, which examines the role of habits in our lives, more useful that her The Happiness Project; common sense, hallelujah. Gary Taubes’ The Case Against Sugar received a lot of flak in the press, and a walloping backlash from the American Heart Association, nevertheless (there it is again…), it has made me… well, not give up all sugar entirely (let’s not take things too far), but it has dampened enthusiasm for my annual hovering up of the leftover Christmas goodies.

Ah, poetry, poetry. Why don’t I read more poetry? Now there is book balm. I revisited T. S. Eliot, and he can still reduce me to tears, and at last I read Gwendolyn Brooks. This sweet part of my literary diet is grossly undernourished and merits more attention.