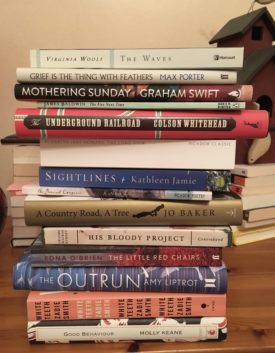 “It was the worst of times, it was the worst of times,” writes Ali Smith in the opening of Autumn, (a book I’ve just started), and, damn, ain’t that the truth? Books had always provided solace against calamities both personal and public, but there were moments during this past year when I could barely pick one up, let alone turn a page. Bowie, Prince, Victoria Wood, Alan Rickman—so many great artists gone—followed by two of my all-time favorite writers, William Trevor and Shirley Hazard. And then, a few weeks ago, my father passed.

Nevertheless, bloody-minded, stubborn, I read on; I can’t help nursing the slim hope that art provides a bulwark against the illiterate, post-truth nightmare in which we now found ourselves. And, despite Brexit, Trump, Aleppo, our democracy hacked and defiled, I did actually read more books this year than last, so—hey, I guess, the news ain’t all bad… In addition (praise be!) so much damn fine work continues to be published, while others from years gone by still sit awaiting discovery on library shelves. There is more than several lifetimes of solace on offer and I fear we will need every last syllable of it.

My discoveries of 2016 include the Irish writer Molly Keane (what the heck took me so long to get around to reading Good Behaviour?), and the lyrical Scottish essayist and poet Kathleen Jamie, who lives but a few miles from my door. I ticked off Zadie Smith’s superb White Teeth and James Baldwin’s astonishing, timeless essays from my ‘should’ve by now’ list, and revisited Woolf’s sublime The Waves—it still makes the hairs rise on the back of my neck. Colson Whitehead’s The Underground Railroad was worth the hype (though I couldn’t shake thoughts of James McBride’s marvelous Song Yet Sung out of my head) and Edna O’Brien’s The Red Chairs was brutal and funny—not an easy blend to pull off—but I so wish Jo Baker’s brave A Country Road, A Tree had garnered more plaudits.

Of 73 books consumed, 33 are by women (46%); not a deliberate result. I do seem to toggle thoughtlessly between the genders, but I need to pay more attention to works in translation and by people of color. I upped my poetry consumption and my digestion is the better for it; frankly, I’m convinced poetry may have prevented me from just climbing into bed some days and refusing to come out. However I failed (again) to achieve my (yearly) resolution to read as many ‘old’ books (those published in past years/decades/centuries) as new releases. Rats. Never mind. Onwards.

As usual, an asterisk indicates recommendations. Titles in bold I would’ve put in my ‘top ten of the year’ should I ever be so crass as to construct one of those lists (!) but given that it appears I can’t count, it’s unlikely…

I’ve reached the moment in this post when I should start warbling on about ‘hope’ and ‘feathers’ and ‘silver linings’ etc, etc, but I’m not sure even Debbie Reynolds could have chin-upped and tap-danced her way out of our current clusterfuck. Still, given that cultures undergoing tremendous turmoil and stress tend to produce great art, strap yourselves in, my beloved friends, it’s going to be a bumper year!