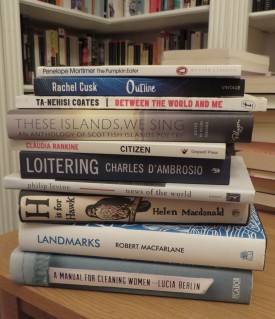 It’s New Year’s Eve, 10.30pm, and I’m struggling to stay awake for the bells. What a year it was. What a year it’s been. I’m knackered, discombobulated. Happy and sad. We moved (again) from one country to another, and moreover, moved back home to Scotland. Exciting; challenging; such massive upheaval is not conducive to long stretches of languorous reading, so my book count is way down. Once again I’m disappointed by my low intake of poetry — dammit — and I let the literati/twitterati sway me more than it should about choices I made, because although I enjoyed some outstanding new releases, I failed to do as I’d planned — which was to try to alternate between a new release and books already published in earlier times / centuries. Therefore many gaps in my reading remain embarrassingly un-plugged.

In case you’re curious, I’ve decided to reacquaint myself with Agatha Christie and Dorothy L. Sayers from the very beginning of their output — purely as an excuse to collect fresh editions because I made the disastrous decision to ditch copies years ago. Patrick Modiano, on the other hand, could be judged medicinal; I’m trying to ‘take’ one Nobel Prize winner a year on the assumption that it might be good for my health. I enjoyed his three novellas very much but I’d hesitate to hazard aloud as to what they’re about. Reading them felt akin to watching a foreign noir with Hedy Lamarr without the benefit of subtitles; the plots were indecipherable and mottled with dark alleys and aliases, and a plethora of Parisian street names… like a very elegantly-written Michelin, but, but…

What a lot of to-do about gender this year. I never think about a writer’s gender while I’m immersed in the page nevertheless I was curious to see, for the first time, how my unconscious selection had panned out. Of the 57 books below, 31 were written by women, making a 54%/46% split between women and men. Golly.

Those marked with an asterisk are heartily recommended — as you can see, it was a very good year — and those in bold are in my top ten. I’ve never attempted such a daft thing before, and I could just as easily have had a top fourteen, and included Lily King’s Euphoria, Anne Enright’s The Green Road, her nibs Virginia’s diary, and Rachel Cusk’s A Life’s Work: On Becoming a Mother. That would put two by Cusk in my top whatever. Heck, Cusk could well be my writer of the year, and Outline the best of the best… But ‘Best of the Best’s’ are kind of naff, aren’t they? So let’s not go dabbling our toes in those waters..