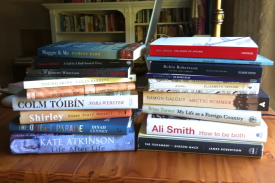 What a year of reading it has been! An embarrassment of riches, and I’ve marked with an asterisk those books I particularly recommend. Fiction favorites include How to Be Both by Ali Smith, the memorable debuts Young Skins and A Girl is a Half-Formed Thing from Irish writers Colin Barrett and Eimear McBride, Bob Shacochis’s monumental The Woman Who Lost Her Soul, Susan Scarf Merrill’s haunting Shirley, Damon Galgut’s moving portrayal of EM Forster in Arctic Summer, and three worthy classics:  Angel by Elizabeth Taylor, The Testament of Gideon Mack by James Robertson and The Rings of Saturn by WG Sebald. Though I revisited favorite poetry this year, I read very few new collections – and, yes, I feel ashamed. Two highlights are the mesmerizing debut River Legs by Jen McClanaghan and Robin Robertson’s collected works Sailing the Forest. It was an excellent year for non-fiction, and I’m trying to catch up on my education in this most versatile of forms. Four standouts are My Life as a Foreign Country by Brian Turner, The Object Parade by Dinah Lenney, On Immunity by Eula Biss, and William Gass’s fluid rumination On Being Blue.

This was my first year of reading some books in a digital format; not by choice, but because I either couldn’t get hold of physical copies or publishers sent a file rather than a hard copy  for review. One of the downsides is that I’ll miss the pleasure of slotting these books into my library – miss the pleasure of running my hands over covers and spines and remembering the words within. It also means, I fear, that I might be less likely to pull these books ‘off the shelf’ to read again. In the coming days the (physical) heap of glory listed below will be shelved, leaving a gap for next year’s riches. How wonderful….and already the options are accumulating (thank you, Santa…). The great joy of reading, surely, is the knowledge that your well will never run dry.