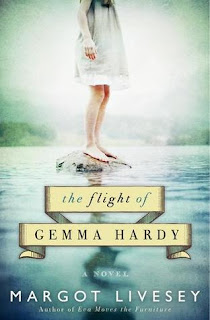 Time to blog is scarce these days but I must mention Margot Livesey’s The Flight of Gemma Hardy (2012), an homage to Jane Eyre set in 1950s and 1960s Iceland and Scotland. It is her eighth book (I believe), and Lord knows I love them all, but this is a corker. After losing both her parents and her beloved uncle, ten-year-old Gemma, “a small verdant island in a grey sea,” is sent by her bitter aunt to be “a working pupil” in an old-fashioned boarding school buffeted by radically-changing times. Despite a life as little more than a skivvy, she manages to secure a secondary education, and later, a position as a nanny in the Orkneys, where she struggles to discover who she was, who she is, and, most critically, who she wants to be.

Tracing parallels with Bronte, through plot and allusion, is enjoyable, but it is much more fascinating to see how Livesey’s cunning deviations from her inspiration make The Flight of Gemma Hardy a nuanced original. There are no post-modern literary hi-jinks pulling the rug from under the reader, no self-conscious, chewy, acrobatic prose; it is a classic narrative crafted with care and sensitivity of a young woman’s attempt to transform her isolation and individuality into strengths, strengths that will allow her to chart her own course, build her own community, discover that “being a wife was not the only choice.” I put this book down only when I had to: at the side of the stove or on top of the tumble dryer, when I was violently ill flying home from the USA, when one daughter seemed on the brink of throttling the other. I had to fetch it to and fro from my car several times, and even parked outside Tesco’s to finish it: quietness being a rare commodity in our house. Her heroine’s combination of pragmatism and yearning is irresistible, (peculiarly Scottish?) traits, incidentally, that are hallmarks of all of Livesey’s work; I’m not sure I know another writer who so effectively combines common sense, the supernatural, and a highly attuned understanding, both physical and metaphorical, of landscape. “We each begin as an island,” she writes, “but we soon build bridges. Even the most solitary person, has, perhaps without knowing it, a causeway, a cable, a line of stepping-stones, connecting him or her to others…” A comforting thought in these over-connected yet disconnected times, or perhaps I just feel them to be so, given I’m once again an exile. For yes, I am Scottish and Livesey is Scottish and I am fortunate enough to know her – but who gives a rat’s arse about being rampantly biased when a book is this smashing?