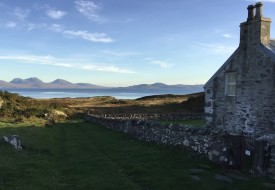 In September I read an essay by John McPhee, “Omission: Choosing what to leave out,” in The New Yorker, and it reminded me how much I admire his work. I promptly made a note to myself to hunt down more of it. I came to the non-fiction genre late, and McPhee’s Oranges was one of the first books I discovered, and his essays have influenced how I think about content and form.

Last week our family enjoyed six glorious and (uncharacteristically) dry days on the isle of Colonsay in the Inner Hebrides. A two-and-a-half hour ferry ride from the Scottish mainland, Colonsay covers a mere seventeen square miles, and has only around 140 permanent residents. Even though its one hotel and scattering of crofts for rent were fully booked, we had the beaches, moors, and glens pretty much all to ourselves. Together with the hotel (and pub), Scalasaig, the largest village, also boasts the ferry terminal, the general store, a micro-brewery, and, amazingly, a well-stocked and eclectic book shop (which recently began hosting a yearly book festival) that also functions as an independent publisher.

On the way back from Kiloran beach one day, Arthur plied our girls with ice-cream so I could visit the book shop, and there, prominently displayed among a wonderful array of Scottish fiction, photography, and poetry was The Crofter and the Laird: Life on an Hebridean Island by John McPhee. First published as a series of articles in The New Yorker in 1969, Colonsay’s independent publisher, House of Lochar, has since kept it in print. I think I’d known, vaguely, that McPhee had written something about Scotland, but I’d no idea that he and his family spent time on a Scottish island, and that the island was Colonsay. The lady in the book shop told me the crofter mentioned by McPhee still lives in his house near Port Mor, and on the following day I would find it, sure enough, beautifully kept and recognizable from a sketch on the cover of the book.

The girls finished their ice creams, and while Arthur drove us back to our rental I unwrapped The Crofter and the Laird and read aloud its opening paragraph:

The Scottish clan that I belong to–or would belong to if it were now anything more than a sentimental myth–was broken a great many generations ago by a party of MacDonalds, who hunted down the last chief of my clan, captured him, refused him mercy, saying that a man who had never shown mercy should not ask for it, tied him to a standing stone, and shot him. The standing stone was in a place called Balaromin Mor, on Colonsay, a small island in the open Atlantic, twenty-five miles west of the Scottish mainland.

After unpacking the car of buckets and spades and fishing nets, Arthur took the girls inside while I clipped on the dog’s lead to take him for a walk. I closed the door behind me and double-checked the Gaelic nameplate–Balerominmhor–and, rather than head down to the beach as usual, Dougie and I walked back a hundred yards or so along the rutted track to the stone standing behind our croft house where McPhee’s ancestor had been slaughtered.