The first baseball game I ever attended took place in Baltimore’s peerless Camden Yards, and my memory of it, like that warm summer evening long ago, is deliciously hazy and honey-toned and sticky with nostalgia. The world beyond the Yard’s brick walls and emerald pitch seemed to recede while I enjoyed a beer-blessed, corn-dog sense of community; winning and losing would happen here, I knew, but the consequences would be either sportsmanlike joy or wistful dejection. There was no thrum of simmering resentment, there would be no violence; we were sheltering in a bowl, not teetering on a precipice. Chad Harbach’s debut novel, The Art of Fielding, feels dipped in ambrosia too, and given the world’s current state of affairs, this may be the source of its appeal.
I’m not sure I envy Harbach; the massive advance, the pre-publication hype, the flattering Vanity Fair essay about his novel’s long gestation, over-heighten the reader’s expectations, (especially when references to Herman Melville are thrown in), and risk making a good book feel disappointing. Harbach is no modern Melville (that role’s already nabbed by Marilynne Robinson, but more on that another day…), and despite his playful allusions to classical and nineteenth century literature and his whimsically-named characters, he spouts no fire and brimstone and his plot interludes on the art of fielding are mercifully shorter than Melville’s asides on blubber and scrimshaw. Indeed his smooth, lulling prose so rarely sings or shocks that I found little to flag for quotes beyond Henry Skrimshander’s reflections on the terror and loneliness of the star rookie player, “You can’t follow me here… you’ll never know what this is like.” (True enough, though I reckon by now Harbach knows exactly what this is like; his agent, publisher, and publicist are probably badgering for a follow-up home run…)
At Westish college on the shore of Lake Michigan, shy and skinny Skrimshander is being mentored by Harpooners’ team-captain Mike Schwartz, a decent young man enduring the painful discovery of his own limitations. Meanwhile, Guert Affenlight, the college president, after decades playing ‘straight,’ switches teams when he falls in love with Skrimshander’s room mate, the enigmatic Owen Dunne, (a reference to his skin tone one assumes), who is as charming as Sebastian from Brideshead Revisited but a heck of a lot less complicated. The book jacket is blessed with a blurb from Jonathan Franzen (Franzen would be so lucky to be so talented…) and some will compare them though they have nothing in common beyond substantial word counts, and stories set in the present day. Mercifully, Harbach lacks Franzen’s tendency to bludgeon the reader over the head with social commentary.
At the risk of damning The Art of Fielding with faint praise, which is not my intent, I think it’s a lovely book, (and I mean that in every sense – catchy cover, quality paper, elegant font – way-to-go Little, Brown and Company!). It’s a lovely book because it is a pleasure to read provided one doesn’t mind the slow, slow pace, and provided we accept that Harbach’s goal is not realism, and that fiction is not life. When his characters face high stakes, he swerves, turns away: a shocking event morphs into a mere bumped head, a deus ex machina averts a college scandal, a much-dreaded former lover arrives from out of town only to fade like a Republican candidate after a Primary, a love triangle threatening heartbreak and broken bones is tolerated with no more than grumpy animosity, a minor pothole on the road of true bro-mance. I’m not suggesting that stories need be externally dramatic – Wharton, James, and Woolf have proven that miniscule events can trigger momentous metaphysical and emotional struggles – but any conflicts of heart and soul in The Art of Fielding are handled too gently to leave blood on the page. At times the pacing is slow, very slow, (especially early on), but this feels fitting given the leisurely nature of baseball and campus life, and it has an enjoyable wryness, yet lacks irony. Harlech has the literary chops to tackle conflict, I think, but he chooses not to; he fails to dig for (or chooses not dig for) the humungous issue that is the miserable bedrock of all serious poetry and prose  – our mortality – and despite there being a death in the book, it is a beautiful death and – plot-wise – a convenient one, and like this entire novel, dappled all over with gold. 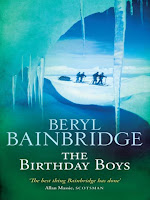 Before reading The Art of Fielding I’d completed The Birthday Boys (1991), Beryl Bainbridge’s fictionalized account of Captain Scott’s tragic and controversial expedition to the Antarctic in 1912, and I couldn’t help but ponder both books in unison given that their shared theme is the complexity of male friendship. A nifty indication of the marked difference in each author’s approach to craft can be found in the thickness of spines: Harbach’s novel is 512 pages long to Bainbridge 181 pages. In The Birthday Boys Bainbridge, again, upends simplistic assumptions about ambition and girth. Many writers tackling such a famous historical event may have felt it necessary to ballast their narratives with expositional proof of the depth and rigorousness of their research but she seems to have thought, “oh, bugger that…” She did her homework, you can tell, because her prose positively vibrates with it, however it’s as though she compiled everything she could then tossed it onto a pyre and set it alight, trusting in her imagination. She skips the cliched runway of a preparatory back story and starts her narrative on the Terra Nova, the barely sea-worthy ship which transports Scott’s team from London’s West India dock to McMurdo Sound in the Antarctic, over-weighted with coal and equipment, held together with caulk, cement, and prayers, each man’s cargo the premature bragging he must justify by journey’s end, and the emotional toll of marriages suspended in various states of repair.
Bainbridge’s prose pulses with energy; some sentences seems to compress a dozen underneath, like ice packs over a swift-moving, fathomless sea: “It seems to me… that we have to make a choice between the spiritual and the material world, and if we can’t become saints then we must find a sort of balance which will allow us to be at peace with ourselves.” Through consecutive first person narratives of the five men (including Scott) fated not to survive, she grants readers the enormous courtesy of assuming we are intelligent and already know about the feuds with Shackleton and Colonial politics, about Amundsen’s triumphs and the merits of huskies, a courtesy that sent this particular reader scurrying to ‘google’ and swot before beginning the book all over again.

“One only has the energy to die for one man at a time,” thinks Dr. Edmund Wilson, attempting to articulate his devotion to the obsessive and difficult Scott, as relations between crew members swing from affection to resentment, from competitive pissing contests to sacrifices made for the team. Like Harbach’s athletes, Scott “withstood the pain simply because (he) couldn’t stand the thought of the mind being controlled by the body.” The price of failure on the baseball field is humiliation and broken dreams, whereas the price of failure in the Antarctic is death, and whatever way you slice it, Scott’s expedition was a champion cluster-fuck: underfunded and behind schedule, supply camps staged too far apart, horses skittering on ice before breaking their legs and being devoured by the dogs, the dogs in turn falling into crevasses to hang jerking and twisting on their ropes. Each man is forced to contemplate its purpose and his own mortality. Captain Oates suspects that his “greatest sin had been that of idleness. I had wasted my days..” before succumbing to gangrene from frostbite, a heartbreaking last thought that stays with me regardless how hard I try to shake it, while Birdie Bowers concludes that “the missing link between God and man is brotherly love,“a vital truism (whether one is religious or not), that only seems to strike home at moments of catastrophe.

Hitting bedrock holds no fears for Bainbridge making The Birthday Boys a shorter, tougher read than The Art of Fielding, but it’s also reckless and courageous, much like Scott himself, whose expedition may have been a glorious feat of scientific endeavor or a hair-brained scheme led by a man utterly at the mercy of his ego. Bainbridge is wise enough to know that most human endeavors are never simply one thing or another but the whole darned mess all schmooshed together, and when I finished The Birthday Boys I felt shaken to the core. So I’m looking forward to Harbach’s second book, and to him taking a big, hefty swing at death, and I’m as mad as hell to be reading, right now, Bainbridge’s last.