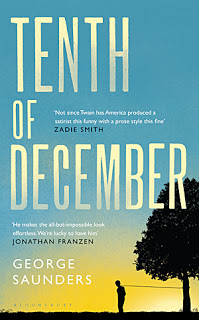 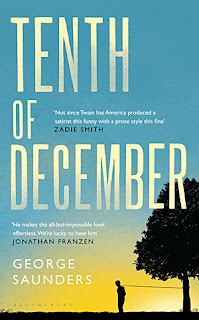 In 1895 Punch published a cartoon in which a curate has lunch with his Bishop. The Bishop remarks that the curate has a bad egg, to which the curate, rushing to placate, says, no, “some parts of it are excellent.” George Saunders’ Tenth of December reminded me of the curate’s egg; six out of ten of its stories are truly excellent thereby granting few favors to the remainder. Given that everyone and his mother has chimed in with almost universal praise, I realize my ten cents is worth… well… probably no more than six, and that reading a short story collection straight through is a hazardous affair. Like enduring one of those chef’s tasting menus in a snobby restaurant, you’re liable to like some courses more than others, and end the meal feeling fleeced and hungry.

The collection is bookended by two of its best: “Victory Lap” and “Tenth of December.” Both require children to show tremendous courage and moral leadership and in neither case do they fail. I love how Saunders writes about children and teenagers, as if they are real people, not props, addendum, or inconveniences. Alison, the ditzy and heartbreakingly optimistic young girl in “Victory Lap,” suffers long after her brush with a man destined for Hell, but Saunders leaves us more worried about damaged, merciful Kyle. “Sticks” captures the burden of inherited flaws in less than two pages, while “Puppy” sets in motion an appalling tragedy due to the snap judgement of one woman of another. Unbeknownst to both, their woes are so similar they could be sisters, and one has a husband that Saunders nails with a single line of dialogue (“Ho, HO!). In “Home,” my favorite story in the collection, soldier Mikey returns from his tour to his ramshackle family, an ex-wife moving on, and the welcome of an indifferent America. His rage scares everyone, including himself, it scares them “until they weren’t talking at all, which made me feel the kind of shame you know you’re not going to cure by saying sorry, and where the only thing to do is: go out, get more shame.” He confronts his ex-wife’s new husband, who faces his aggression with talk-show empathy that can’t help but condescend: “I started to feel like a chump, like I was being held down by a bunch of guys so another guy could come over and put his New Age fist up my ass while explaining that having his fist up my ass was far from his first choice and was actually making him feel conflicted.” Every other person blandly thanks Mikey for his service, as though he’s merely held open a door; he doesn’t want to be thanked, he wants to be seen and heard, he’s no longer convinced that you’re welcome.

Saunders has an intuitive understanding of revealing character through dialogue. His diction is stellar and he starts each story at a sprint, with nary a superfluous word. In his interview with the Huffington Post, he reiterated the critical importance of voice and rhythm – of the music of words, something which is rarely referenced in discussions of craft, and worth quoting in length: “At one point they asked Van Halen how he knew when a take was good and they could stop recording. And he said, ‘I don’t know man, it’s just the brown sound.’ And that rang a bell with me. When you’re looking at prose, you often talk about it in terms of theme or content or intention. But in my experience, it’s mostly aural. The fascinating thing is that when I have a paragraph that isn’t doing it for me, and I start poking at it, it starts sounding better and in the process it kicks out meaning. You sense that it needs a fourth beat, you supply it, and it’s ‘onion.’ Well, suddenly you have an onion in the story. My feeling is, your attention to the sonic quality of the prose produces everything else.” This quote explains why, even though I wasn’t wowed by his collection, I may topple from being an admirer to a groupie. Having come from a culture predominantly preserved through poetry and song, I feel this at gut level, but it’s a difficult skill to explain or master, though I suspect Saunders is a humdinger of a teacher.

I’m not completely deluded; I know my antipathy over such stories as “Escape from Spiderhead,” set in a futuristic testing lab, or “Exhortation,” written in the form of an office memo, is subjective, and has nothing whatsoever to do with the quality therein. I have a visceral reaction to the way prose looks on the page, and whenever I see it mimicking an email or a shopping list or a dry cleaning ticket, or see a heavy splattering of acronyms, or Olde Worlde Captilisation, or stub my toe on an invented brand or trademark symbol – well, stub my toe on anything that might make David Shields’ toes curl with delight – my hackles rise. Such stories conjure up memories of workshop exercises. Granted Saunders executes them far and above the rest of his class, but only because it’s so easy for him – he’s in cruise control – and to congratulate him for cleverness is akin to congratulating a Formula One driver on a tidy three-point turn. To whom much is given, much is required. Saunders has the skills to Philip K. Dick around (or Saramago or Zamyatin around) but doing so may limit his audience, and that would be a tragedy. He doesn’t need to launch into the future when he has the whole hyper-reality God-awful mess of PRISM-America lying at his feet.

I’m not suggesting he needs to dash out and write a novel. Short stories are not fiction’s second-class citizens. He’s a natural – like Cheever, Trevor, Chekhov, Munro – at this most dangerous of forms, dangerous because there is no room for sloppiness or boredom. Experiencing the gap in quality between the best stories in Tenth of December (amazing!) and the rest (merely great) is like speeding along an autobahn pocked with manhole covers. Furthermore, I didn’t sense a progression in risk and scope between this collection and his previous, In Persuasion Nation. Saunders’ unenviable task is not to settle for writing more of the same. If I were him I’d be tempted to give up now while he’s being mentioned in the same breath by some commentators (prematurely) with Twain.

Nevertheless, Saunders’ work is necessary because – and here’s the second and third reasons I’m teetering on the edge of groupie-dom – he’s funny (hallelujah!), and he’s not afraid to talk about class. Having been raised in a nation where class awareness is still a scourge and a fetish, I was struck to find the US similarly infected, though in different ways: between the North and the South, between the coasts and the heartland, between Ivy league and non, between those with health coverage and those without, those who serve in the Armed Forces and those who do not. The US press, politicians, and TV hacks bang on and on about the middle class – what the middle class wants, what they deserve, how they are exploited and taxed – while ogling the very rich and ignoring huge swathes of the unemployed or working poor living on or close to the poverty line. The working and lower-middle classes seem to be depicted more often by British writers, but continue to be absent in much of contemporary US literary fiction, which remains primarily concerned with the angst of the middle-classes, and is written primarily for and by members of the middle class. Readers also tend not to pick up fiction about the working poor – perhaps we prefer not, it might be too depressing – and because this group tends not to write fiction, they risk being voiceless. As for the very rich, we don’t read much fiction about them either, and when they do appear they’re often villains, as though having a lot of money automatically precludes a character (or a human being) from the right to empathy. Saunders neutralizes the risk of talking about class, and of making strong social commentary, through humor. His default mode is funny/sad.

In the UK, class is defined by background, where we were born, what our parents did, and how we were educated –  our biography remains definitive regardless of shifting financial position. Using typical American metrics, I would be defined as middle-class, whereas I still consider myself working-class. In the US, there is the ‘dream’ that one can migrate up the classes using money. Saunders gets this, he gets that “rich people make poor people feel dopey and inadequate,” and not only are some of his stories centered around the working class – around the voiceless – he understands where his characters lie on the social spectrum (though it would be nice if he moved more freely up and down that spectrum – given he often writes in first person or close third – as over the long haul his characters are danger of sounding the same). In the Huffington Post interview, he talks of those years when he worked menial jobs to scrape by. “Finally, in terms of money,” he says, “I got it: money forestalled disgrace.” Keeping up with the Jones can become a creed; being strapped for cash in America due to tragic circumstances or birth’s roulette, is sometimes attributed to a lack of backbone. “Lord, give us more,” prays the father in “The Semplica Girl Diaries,” “give us enough. Help us not fall behind our peers.” Many writers, who are born working class, may no longer be defined as such if they achieve success. Saunders may fall into this category, I’m not sure. Nevertheless it can be a challenge to write with humor and truth about people whose opportunities and education may be more limited than the writer’s own, without crossing that fine line between empathy and condescension. Saunders (pretty much) manages it.

Reviews for Tenth of December were enthusiastic on both sides on of the Atlantic. US reviewers found it funnier, naturally, given its home-grown in-jokes. Naturally, they see black humor in the contradiction between individual freedom and conservative conformity, the conflation of success with money, whereas some Brits don’t really find these things funny, they find them sad. And despite appreciating Saunders’ satire, a few might be baffled (and envious) of his swerve toward optimism. Then again, we Europeans always find optimism baffling, having lived through the Plague, Hitler, Ingmar Bergman, Stalin, the Eurovision song contest, the Blitz. Europe was horrified and empathetic following 9/11, but not completely surprised, whereas (Pearl Harbor aside), 9/11 was American optimism’s first punch in the face – from which, please God, it will recover, because optimism depends not on governments but individuals and, Saunders’ implies, is the default condition of the (American) heart. Go on, “smelling that American dream baby…”

When the grisly story of the Cleveland abductions first broke, footage circulated of Charles Ramsey, the rescuer, being interviewed on TV. Some laughed at this ordinary man in extraordinary circumstances while he told his story, and there was a hint of mockery, of condescension, in his subsequent exploitation in tabloids and YouTube for his distinctive speech, for being poor and black and uniquely himself. Saunders, I suspect, recognized wisdom in Charles’ words, when Charles said he knew something must be wrong when a pretty white girl runs into the arms of a black man. Saunders is the kind of writer who would grant him respect, grant him a voice, knowing that Charles is not a fool, and if he were, he would be a fool only in the way of The Fool in Lear: an everyman conduit of the truth.