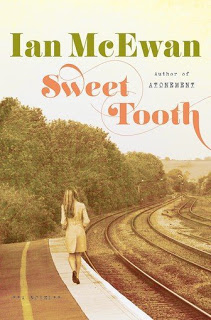 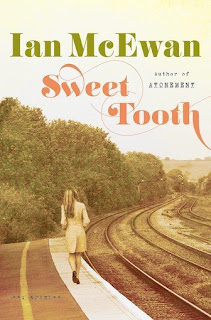 There comes a moment in a successful writer’s career when critics are tempted to stop comparing his or her work with any work other than his or her own. McEwan is such a writer. His prose is always lucid, elegant, and seemingly effortless, and he can ‘dial’ up or down his literariness or switch voices depending on his plot and metaphorical intents. Unlike similarly blessed wordsmiths, such as Banville or Brookner, he is more of a chameleon, so when you do cast your mind over his previous releases they don’t repeat like needles spinning in the same groove. The down-side, however, is that not every novel can be a best novel and if Sweet Tooth, his latest release, had been the debut of an unknown I may have been able to weigh it fairly on its own merits, but instead I found myself comparing it to his early Sparkian works, such as The Company of Strangers, which shimmer with menacing brevity, or his later masterly door-stop Atonement, which, though more ambitious than Sweet Tooth, shares a similar taste for metafictional games. McEwan, obviously and rightly so, won’t give a toss what I think. Like a gourmet chef taking a break between feasts to bake a fondant for afternoon tea, McEwan seems to have concocted Sweet Tooth for the fun of it – to tease us with its purportedly autobiographical flavor – and it is a tasty confection. Slight and odd.

After an affair with an aging history professor, young, attractive Serena Frome (rhymes with ‘plume,’ – could that be a clue?) is enlisted by the Secret Service into the ongoing Cold War of the early 1970s. She is averagely bright but not imaginative, unfashionably conservative and not voraciously political, so her recruitment appears an anomaly, that is later (partially) explained. Initially the sexual politics of the time renders Serena’s role decorative and administrative. Inside the anonymous, nondescript London offices of MI5, she types, shuffles buff-colored files, and undertakes some light if unsettling housekeeping, while being bossed around or manipulated by folks with silly names (Shirley Shilling, Maximilian Greatorex, Peter Nutting, Harry Tapp). Her chance at espionage arrives via MI5’s screwball plan to sway public opinion through cultural philanthropy. Serena, a voracious though shallow reader, is sent to charm the socks off a struggling, promising writer. Given that Tom Haley is underpaid, under published, and starved for acolytes, the arrival in his office of this fawning leggy blonde with a checkbook charms off not only his socks but his underpants. After all, “how could he have known if he was any good until someone confirmed it?” Why their relationship matures beyond a quickie remains a mystery, and Serena, the nice vicar’s daughter, seems comfortable sharing awkward intimate details of her first sexual encounters with various beaus.

Sweet Tooth is loosely grounded in 1970s Britain by a narrator remembering those days in retrospect, who seems neither particularly observant nor bothered about drawing any cultural or political conclusions despite benefiting from historical perspective. The practical prose -“I had a small suitcase under my bed. I would need to remember my hairdryer” – occasionally oddly soars – “I saw myself in watery sunlight, divested of all obligations and connections, walking without luggage along a narrow road by a sandy bay, with sea thrift and gorse and a solitary pine, a road that rose to a promontory and a plain white country church in whose tiny cemetery was a fresh stone, and a jam jar of harebells left by the housekeeper.” McEwan drops in real names (Roth, Amis, etc.) to anchor its veracity in the literary milieu, still it’s obvious about one third of the way in that he has no aspirations to de-throne le Carre. Whenever a writer appears in a work of fiction, it is almost guaranteed that the plot will stop being about whatever it’s supposed to be about – spying or love, for example – and start being about duplicity. Serena reads and summarizes Tom’s previous stories, which are apparently based on McEwan’s own early work, and given the hefty length of these rather tiresome metafictional diversions, I assume the allowable word count of literary journals was much greater then than now. Yes, Sweet Tooth is as manipulative as Atonement, but reader reaction to its denoument may more likely be exasperation than vitriol because Atonement is the better book. McEwan’s wiliness guarantees I don’t trust his narrators as far as I can throw them, so the ending made me smile – and it is uncharacteristically chirpy – because I’d been second-guessing scenarios all along. Nevertheless, I was much more interested in his exploration of writers’ and their relationships.

Tom and Serena discuss books often. He prefers Spark and Fowles over Byatt and Drabble, while she likes to feel the ground beneath her feet and “didn’t like tricks, I like life as I knew it recreated on the page (while) he said it wasn’t possible to recreate life on the page without tricks.” She finds it hard to separate the man from the author and she “couldn’t banish the thought” that Tom was making “mental notes, creating and adjusting phrases to his liking,” using her as material for some future project, a fear shared, surely, by anyone who comes in contact with a writer, and with good cause. “To recreate you on the page I had to become you and understand you (this is what novels demand),” explains one character, “and in doing that, well, the inevitable happened…. I still love you. No, that’s not it. I love you more.”This is a timely quote given my previous post about David Shields and his preposterous suggestion that fiction may no longer matter. Fiction matters precisely because it does demand that the writer ‘becomes’ other people, does walk around in their shoes, live inside their heads. Without fiction our collective necessity to exercise empathy may atrophy, a lesson well dramatized by Sweet Tooth. Another lesson might be: never trust a man who goes straight from your bed to his desk.