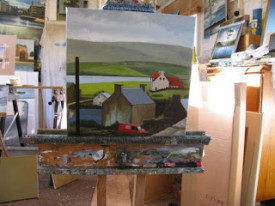 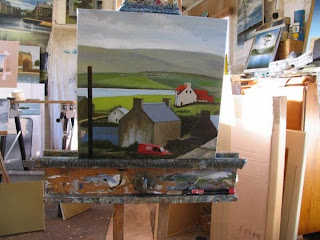 I am surfacing from a long time underwater, awsim in edits, both freelance and personal, as my first collection of short stories is due out this fall (plug, plug..) , and herewith is a photo of the beautiful painting, sitting on the easel of talented artist Mr. Louis McNally, which shall grace the cover of the book.

Much ado-s about somethings and nothings have occurred over the weeks of my submersion. One of my favorite novels, the 2oth century classic, The Master and Margarita by Mikhail Bulgakov, has just been given the graphic treatment by Andrzej Klimowski and Danusia Schejbal, and the Guardian have a slide show of some of the gorgeous artwork of this re-issue, which will be available in the US in October.
On July 17th, Kay Ryan was named the new US Poet Laureate, and her first public appearance will be at the National Book Festival in Washington DC in late September. The New York Times offered this article by way of introduction to Ryan’s work. And yes, its official, Salman Rushdie’s Midnight’s Children is the Booker of all Bookers, in one of the most bizarre “best of” competitions ever to take up print-space. I guess I’m going to have to read it now, darn it, though some doubt has been cast on how many of those folks who voted for it have actually read it, and how much of its popularity is due to Rushdie’s name

recognition. Nevertheless, if Rushdie is now the reigning King of the literary darlings, then surely Jhumpa Lahiri is Queen, so exalted that judges simply brush aside her competition with nary a glance. The decision of the panel behind the Frank Connor Award for short fiction to dispense with a short list altogether, and simply declare Lahiri’s Unaccustomed Earth the winner, has caused little ripples of annoyance in some quarters. Yet another book I’ll have to read…
News of rapidly diminishing book review coverage continues with the announcemen

t this week that the LA Times will no longer have a freestanding Sunday book section. LA Times editor, David Ulin, in conversation with PW’s Sara Nelson, says they will increase their on-line coverage by way of compensation. Past LA Times book editors sent a letter to senior management highlighting their dismay at this latest nail in the coffin of cultural discourse – as the blog of the NBCC noted dryly, ‘will the last book review editor, please turn out the lights…” John Sutherland on the Guardian’s blog, made an attempt to understand why literary criticism is an endangered art form, and concludes that criticism is moving from traditional paper onto the web, with, he believes, dire consequences. “The blogosphere,” he writes, “is doing for literary style…what texting did for punctuation.” Ouch!