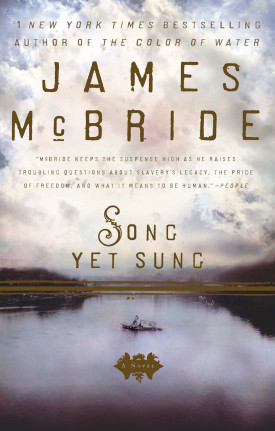 The next time James McBride attends an award ceremony, I imagine he’ll prepare a speech. The happy, if flummoxed, McBride won the 2013 National Book Award for Fiction, beating hotly-tipped George Saunders (Tenth of December) and Rachel Kushner (The Flame Throwers), while wearing a rented tux. I’ve yet to read The Good Lord Bird – which, as of yesterday, had yet to secure a UK publisher, but I bet it’s got one now – though a few years ago I had the pleasure of reading and reviewing Song Yet Sung (2008) and it, like his winning book (referencing the life of the abolitionist John Brown), is also based on historical events.

Song Yet Sung truly sings; it is that rarest of commodities, a literary novel that is also a rattling good read. Being both enjoyable and popular (it became a ‘one Maryland, one book’ choice in 2009), might have caused some readers (and some reviewers) to underestimate the quality of McBride’s lean and engaging craft. Loosely referencing the life of Harriet Tubman, while debating the achievements and failures of the Civil Rights Movement, it follows the flight of a slave, Liz Spocott, over Maryland’s Eastern Shore, pursued by a ragtag of bounty hunters and aided by the Underground Railroad. The Eastern Shore in the 1850’s was an untamed land shrouded in myth and superstition and sparsely populated by gritty, independent folk, and at night, “more dreadful than the retreats of ancient Druids.” Communication was by word of mouth; transportation by mule or canoe; and freedom a mere hundred miles or so north, for any slave gutsy enough to take to their heels. A sieve for runaways, the Delmarva peninsula “sucked them out of the woods of Virginia, North Carolina and points south, like a bilge pump,” and its dangerous, swampy landscape is only one of many memorable characters in Song Yet Sung.

After sustaining a musket shot to the head, Liz becomes dazed and hallucinatory. Those she meets name her the Dreamer because of her ability to foresee the future, and what she sees ain’t pretty: “fat black children who smoked odd smelling cigars and walked around with pistols in their pockets and murder in their eyes… and colored men dressed in garish costumes like children, playing games… bragging like drunkards.” Hot on her heels is Patty Canon, the queen of the slave trade, a gang-leader and murderess; if there is any stealing of slaves to be done, she’s just the gal to do it. Patty also captures runaways and ransoms them back to their owners. Hell, if they’re comely, she might even breed ’em. With her buckskin skirt and pistol in her belt, Patty’s as saucy as a burlesque and as dangerous as a rattler – a character so much larger than life that she hijacks the novel and must be (and is) based on horrendous historical fact. Her pursuit of Liz, though, is not plain sailing because she must deal with the taciturn local watermen who don’t own slaves, don’t like blacks, and don’t give a damn about anybody or anything beyond God and the weather. Furthermore, she must dodge her nemesis, the Woolman, an escaped former slave living wild in the swamps, whom the locals reckon is the only man capable of dispatching “that witch (Patty) to the boneyard.”

Meanwhile, Denwood Long, a rival bounty hunter known as the Gimp, is tempted out of retirement by the rich reward offered by Liz’s former, molesting master. Still mourning his wrecked marriage and his long-dead boy, Denwood is maimed physically and emotionally, and his slowly awakening consciousness of the abomination of slavery proves to be as pesky and debilitating as his gamy leg. When he warns a slave who has helped Liz escape that Patty’s revenge will prove hellish, the old slave replies,”What do it matter to me? I’m in hell now.” It’s hard to threaten those, Denwood realizes, to whom “death is a relief.”

McBride’s watery Maryland breathes and laps over the pages of Song Yet Sung, it’s farms and inlets furnished with talking quilts and signaling skips. Every wood pile, every pant-leg, semaphores to those familiar with with the Code of the Gospel Train, on which the runaway Liz is a reluctant passenger. (Historical verification of any such ‘codes’ has proven sparse but it sure makes for good fiction.) Liz’s prophecies become more frequent and, at times, more hopeful, foreseeing a savior to come. “I don’t need to go up north to be free,” she says, pointing at her heart, “I’m free here.” She foresees many events, including the Civil Rights Movement, but, given that Song Yet Sung was written before Obama’s candidacy, she doesn’t predict that one day a black man will win the presidency. Though I doubt she’d have been bedazzled.

Now and then McBride’s social and political intentions are made too clear; his perversion of stereotypes – such as Kathleen, the slave-owner with the heart of gold, or Eb, the black bounty hunter – can feel too deliberate. Occasionally his characters spout dialogue that is obviously his, not theirs, and he manipulates Liz’s dreams to deliver sharp criticism on some aspects of modern African-American culture. I forgive these thematic manipulations – these somewhat clunky allegories – because he wraps it all up in such a tense, rollicking yarn. It’s been five years since Song Yet Sung was published and I’m surprised that it hasn’t yet made it to the big screen. McBride is a renaissance man, not only a writer and a best-selling memoirist but a musician, composer, screenwriter, and producer, and Song Yet Sung is deeply cinematic and ripe for adaptation. Many actresses, I would have thought, would happily hoik into spittoons during their auditions for the chance to win an Oscar playing a Calamity Jane gone feral.