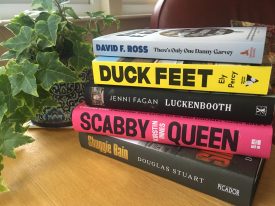 As a voracious reader, I jumped at the opportunity to be part of the shadow panel for this year’s Scotland’s National Book Award for Fiction. Despite being born and raised in Glasgow, it was the first time in my life, I realise, that I’ve had the pleasure of reading five Scottish books in a row; and by Scottish, I mean not only books written by Scottish born or based authors, but books set in Scotland, unfolding against a backdrop of Scottish culture, politics, history and language. And what a terrific shortlist: There’s Only One Danny Garvey by David F. Ross, Duck Feet by Ely Percy, Scabby Queen by Kirstin Innes, Shuggie Bain by Douglas Stuart and Luckenbooth by Jenni Fagan. The sheer quality of Scottish fiction published over the last two years meant that I could think of other books that could also have easily made the cut. We need a longer shortlist!

When we read books alone, we tend to discern their value by how closely they adhere to our own particular conscious and unconscious biases—succumb to the danger of our personal echo chamber. But behold the power of the panel. Although I began our zoom meeting with my mind made up—just like in the best book groups—our lively discussion had me constantly tinkering with my rankings. Nevertheless, it must be said, the panel could (and should) have been more diverse—it was all women, all white.

The opening chapters of Ross’s There’s Only One Danny Garvey seduce with smarts, humour, and football, like a Scottish Nick Hornby, before it twists into something more queasily gripping. Percy’s Duck Feet is the most glorious tragic-comic depiction of life as a Scottish teenager I’ve ever read. I’m a generation (or two) older than its heroine, but I felt all over again the joy and angst of adolescence, that heartbreak of shifting allegiances, that awkwardness over social dancing and tonsil hockey. I was bawling by its end, and it should be immediately added to Scotland’s high school reading curriculum, not only because of its handling of diversity and sectarianism but also because it’s written in glorious Scots.

Fagan’s magical, raunchy Luckenbooth—her hymn to Edinburgh—is a worthy addition to our cultural love of dancing with the devil, joining the library of The Private Memoirs of a Justified Sinner, The Ballad of Peckham Rye, Poor Things and The Testament of Gideon Mack. Clio, meanwhile, the shapeshifting heroine of Innes’ Scabby Queen, alludes to Scotland itself. Beautiful, flawed, skitterish, exploited, ridiculed, loved, abused, commodified, she spends a lifetime struggling to work as if she lived in the early days of a better nation.

The shortlist was rounded out by Douglas Stuart’s international prize-winning juggernaut, Shuggie Bain, the painfully gripping tour-de-force about a boy watching his mother’s attempts to escape the trap of her gender and economic circumstances. Yet, regardless of such diversity of content, these books all felt to me to be essentially Scottish, in that each one depicts a community; each one depicts a large cast and explores how landscape, language, gender, class, racial and religious identity affect our life experiences. In every book, the personal is political. At no point does the reader wonder how any character earns a living.

As you can imagine, much of our discussion circled around the thorny issue of what exactly is a ‘best’ book. Well, we agreed that it must satisfy the inevitable tussle between literary merit, enjoyability, and timelessness. Does it make us think? Does it make us feel? And the eventual winner, I believe, thrills both the head and the heart.

**Update on 27 November: Winner of the Scottish Fiction Book of the Year – Duck Feet by Ely Percy!