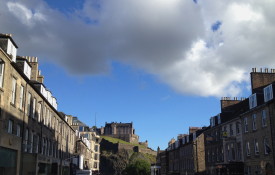 I’d planned a short round-up of the opening day of the Edinburgh Book Festival, but then I found this smashing summary by David Robinson of The Scotsman. I agree wholeheartedly with his appreciation of Ali Smith, who brought her characteristic inventiveness to the inaugural HG Wells lecture — being funny, political, chilling, and deeply human all at once — but I was a tad disappointed in the Marilynne Robinson event.

Robinson’s event, like Smith’s, had a sold-out audience, who buzzed with anticipation, many clutching copies of her books, given that she so rarely appears on this side of the pond. But some, including myself, were unprepared for her dense and (mostly) humorless talk, heavily couched in metaphysical and epistemological terms that might have been more appropriate for a university forum. I appreciated her intent — to recognize and value intelligence in the natural universe, above and beyond the human — but might have enjoyed it more had I read it in, say, the London Review of Books, over a coffee, with time to think, pause, and digest the complexity of her arguments. Perhaps an unfortunate choice of material for this audience? Someone — her agent, the event organizer — hadn’t briefed her well enough on expectations. Don’t get me wrong, I’m not implying that the audience didn’t have the smarts, but I suspect many had come hoping to hear from an artist they deeply admire about the artistry that went into producing the incomparable Housekeeping (my favorite), and the trilogy of Gilead, Home, and Lila.  I felt the excitement drain out of the tent, as if the audience were trying to connect this impressive but cool woman with those warm novels which had so deeply moved them. It didn’t help matters that during the question and answer session she seemed not only reluctant, but dismissive, of any attempt to get her to share her thoughts on her creative processes. It was, all in all, a very constructive lesson in the complex and mystical construction of voice; that is, in recognizing that there are layers in every narrative between the writer, the point of view, and the characters, something that not only readers, but reviewers, often confuse. I’ve had the pleasure of seeing Robinson before, but here she seemed at her most ‘Melvillian.’ I learned, by the way, that she never revises. Jings.

A couple of days later I attended a Rachel Cusk event, where Cusk touched briefly on the public fallout from both A Life’s Work: On Becoming a Mother and Aftermath, her reflections on divorce. “My work is experienced as being more autobiographical that it is,” she said, but admitted that it felt as though the “front of my house had been blown off, and I forget (when writing) that I’m going to be hit by the blast.” Almost all writers, she believes, must grapple with the notion of exposure if they want to aim for honesty in their work. The aftermath of  Aftermath “shut me up for two years” and her latest novel, Outline, is, in one sense, a response to this. “I wanted a form that would describe a devastated landscape,” she said, and its narrator is “the result of me seeing how far I can experiment with non-story as a narrative perspective.” She finds that her work is changing as she ages; now she is in her forties it is more reflective, because she’s “not living in the moment any more, because you get to the end of believing in things.” Cusk came across as sharp and straight as her prose; she seems aware that her approach to her art — that searing honesty — has consequences both public and personal, but she didn’t strike me as the kind of person who would compromise. I’ve just finished reading Outline, and it has confirmed what I felt when I read some other her work — namely A Country Life, Arlington Park, and A Life’s Work: On Becoming a Mother — that she is a blistering chronicler of the human condition who deserves a wider audience. “These are my qualities,” she said of her particular voice,”and what I see, I can’t change.”

Janice Galloway is another writer who seems very comfortable in her own skin, though much more comfortable in front of an audience than Cusk — granted she was playing to a large home-crowd. Galloway, who has just released Jellyfish, a story collection, lamented the difficulties of getting stories published at all. She also doubts, given the current heavily consolidated and risk-averse (and London and New York-centric) publishing industry, that her landmark novel The Trick is to Keep Breathing (from 1989) would get published today, given its working class, Scottish female protagonist and its subject matters — alcoholism, anorexia, depression — a novel deemed worthy to be included on the Scottish school curriculum. Galloway is charming, funny, and garrulous: the book-signing queue took an eternity.

From Galloway to Salley Vickers, yet another gifted writer, but with a completely different style and concerns. Vickers, I learned, used to be a psycho-analyst and psycho-therapist specializing in patients suffering from trauma or having extreme difficulties with grief, but she stopped practicing following the success of Miss Garnet’s Angel (2000). First and foremost, she didn’t want her patients to fear a breach of confidentiality, fear she may use them as material, but also because she found that the act of creativity and the act of empathy required the same ‘muscles’ and she couldn’t effectively do both roles. She has a “preoccupation with place,” that is place with a wider, personal significance for her. Thus Venice, which she knows well, appears in Miss Garnet’s Angel, and The Cleaner of Chartres was written after spending a lot of time in Chartres, and having spied, early one morning, a cleaner scrubbing the cathedral’s famous labyrinth. A recurring theme in her work is death: how we cope with it, and how we recover from it. She is interested in our attempts at reparation following a death, and often uses spiritual or supernatural elements as a way of navigating grief, regret, and guilt. Vickers has released a new collection of short stories, The Boy Who Could See Death, and she described working on a novel is being “like a marriage (requiring tolerance, stamina, patience, acceptance of flaws, forgiveness) whereas a short story is more like an affair.” Apparently she wrote these stories, had these flings, so to speak, while working on a novel that will be out next year.

Seeing a writer you admire in the flesh can sometimes require a mental readjustment. Vickers was an interesting contrast to Robinson in that she seems exactly as one might imagine she would be based on her work (as if you could possibly ‘know’ someone in the superficial context of he or she having a chitchat on a stage), she was quietly spoken, gently humorous, a little wistful, mysterious. Robinson’s work, on the other hand, is so spare yet poetical, spiritual (in the best sense) and forgiving, that many readers might want to wrap their arms around her, but I’m not sure that would be advisable. Watching Robinson lecture, my mind kept drifting to thoughts of the Scots Brethern. Then again, Rachel Cusk made the remark that most writers are shy, and that their books are “a defense, a shield,” against the world and that she is often bewildered that writing festivals or colleges should ask her to share thoughts about life, the universe and everything, because her work is how she talks about life, the universe, and everything. Here’s my book, Cusk wants to say, read this, and you’ll know. I suspect Robinson might feel the same way.