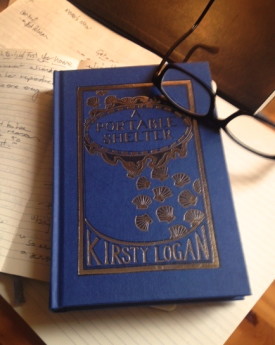 In September 2014, Dame Marina Warner outlined the reasons behind her resignation from the University of Essex in an article for the London Review of Books, “Why I Quit”, in which she warned that cuts in education spending, combined with the worrying trend of prioritizing profit over academic research and excellence, was undermining the quality of the British graduate education system, and would prove a disservice to not only students and teachers but to our culture at large. Her comments spawned considerable debate in academia and the press, and confirmed my admiration of her as a conscientious academic and historian — and a fabulous badass. So, it was great to see her, together with Kirsty Logan, an author of contemporary fairy tales, in a panel discussing classical and modern mythologies, expertly chaired by Charlotte Higgins, the chief culture writer for the Guardian.

Naturally, much of the discussion focused on the characterization of women. “Female voices have been obscured (down the centuries) by male transmission,” said Warner, nevertheless, folk tales and myths are “a rich source of female experience from the historical record. There is a wisdom contained in them, though heavily encrypted.” To Warner, “a symbol is a time machine,” that “generates form for a new experience.”

After Logan read her short story, “The Keep,” from her new collection, A Portable Shelter, Warner talked of its roots in Bluebeard, and referenced an earlier (and much beloved) re-imagining, “The Bloody Chamber” by Angela Carter, and stressed how important Carter was (and still is) to feminist cultural criticism. Scary fairy tales, said Warner, function as allegories for their readers, about the dangers inherent in human nature and the environment. Bluebeard, in particular, warns young women about predatory men and that “not sex but childbirth might kill you,” given that, in previous centuries, child birth was the most common cause of female mortality.

Warner loved Logan’s choice of title for her collection, because “a portable shelter is what a story is.” We carry these portable shelters down through generations, handing their wisdom on to our daughters — and our sons — and we have a responsibility, a stewardship, toward the intangible heritage of our literary tradition, which, like more tangible national heritages (such as archeological sites), requires our protection. Stories are a quest to find a meaning for life, and “are open, in the way an equation isn’t or that a newspaper report shouldn’t be.” This triggered a discussion of the differences between  ‘truth’ ‘story’ and ‘facts,’ in which Warner shared her deep concern about the indiscriminate use of language by the British press and politicians regarding the current refugee crisis in the European Union. “Words matter,” she stressed, and called out those who fail to differentiate between the terms “migrant” and “refugee,” or perpetuate xenophobia and racism by describing groups of people as “swarms.”

The ancient Greeks and Romans made “an archeology of narratives,” using myth to explain phenomena that we now understand through scientific study. We believe in a story in a different way from the way we believe in science or the news. We understand when reading a fable that ‘truth’ is allegorical while the events are fictitious; similar to an approach used by many with regard to religious texts. Logan talked of these two systems of belief by mentioning a visit she made to the isle of Staffa. Although science has proved that its striking rock formations were caused by geological events, as a writer, she admitted to preferring the mythological explanation. Warner agreed that the fable behind Staffa is attractive but said that it was important we never become blinkered by romance or dogma, given that some have attempted to use Staffa, and other such unusual phenomena, as proof against Darwinism. It is possible, if not essential, she said, for a writer to hold both the mythical and the rational in mind simultaneously, echoing the sentiments of Marilynne Robinson’s talk earlier in the week, in which Robinson stressed our need to recognize that nature has intelligence too, and that there is much we have yet to understand, and we must not to allow our lack of understanding of universal phenomena to close our minds toward either the rational or the metaphysical. “In order to learn what it means to be alive,” said Warner, “we must use emotional intelligence.”

Julian Barnes’ emotional intelligence was on display during a fascinating discussion with Tim Marlow of the Royal Academy about his new books of essays, Keeping An Eye Open: Essays on Art, exploring Barnes’s relationship with the visual arts, which often provide inspiration for his fiction. As a child, Barnes explained, he was rather put off art, and it wasn’t until he was young man that he began “consciously looking at pictures rather than being passively and obediently in their presence.” When younger he had favored modernism over realism – implying this is what the young tend to do — assuming that realism was merely “a default setting for art,” before understanding that realism also required “choice and imagination,” and that modernism, too, “had a built in obsolescence like all other art movements.” Nevertheless, this built-in obsolescence could make it all the more rather than less interesting. He appreciates landscapes; that, if done well, “a landscape can be an enigmatic narrative,”and shared his admiration for the works of the British abstract artist Howard Hodgkin and the French painter Jean Etienne Liotard (currently on exhibition at the National Gallery in Edinburgh) and the Swiss painter Felix Vallotton (read Barnes on Vallotton here), whose first British exhibition Barnes will curate next year at the Royal Academy in London. The best works of art, Barnes argued, cause writers, cause of all us, “to bash our heads against the wall of meaning,” that is, they remain enigmatic and change over time, as oneself changes over time. The best art, like Hodgkin’s, “teases us with narrative and then refuses it.”

He dislikes the works of Jeff Koons and Andy Warhol, because he believes they are attempting to imply wry depth and profundity, when in fact he finds their art simplistic and facile. Given that Koons was a commodity trader, he suggests, it’s not surprising that he is “trading commodities” in his work. Barnes also expressed concern about a trend among contemporary artists who seem to be under pressure to develop a “thesis” or an “answer” to what they are trying to do at the beginning of their careers, rather than approaching their art over their lifetime (the way an essayist approaches the essay, perhaps?) as a conduit to discover the questions. “You feel that the narrative is floating free from the art,” he said, rather than the artist allowing his or her art to speak on its own terms, to reveal itself, and reveal itself differently to different viewers (or readers). He reiterated Matisse’s suggestion that “Artists should have their tongues cut out,” and told a funny anecdote about Howard Hodgkin being interviewed on television, and refusing all attempts by his interviewer to make him reveal what his art actually meant. Finally, in frustration, the interviewer launched into his own interpretation of how Hodgkin and planned and executed a particular painting, and what it indeed it symbolized, and at the end of a considerable monologue, Hodgkin had simply shrugged and replied, “But that presupposes that I know what I’m doing.”

(And, finally, here is nice roundup of the end of the festival by David Robinson in the Scotsman, where he raves about the incomparable Anne Enright, who read the same extract from The Green Road that I was fortunate enough to hear at the Borris Festival back in June. And if you haven’t read The Green Road…..well, what are you waiting for? Oh, and, funnily enough, Anne Enright studied under Angela Carter at the University of East Anglia, and Enright said that Carter’s entire feedback on her work was “this is all fine.” When Enright told Carter that she planned to return to Ireland after her graduation, Carter had replied with a look of horror. “What on earth for?” she asked, and when Enright explained, “for a man,” Carter shrugged and said, “Oh, alright, then.” Ah, feminism.)