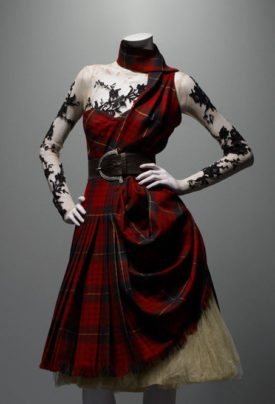 I’ve often remarked that I’m a slow writer, but I’m not sure folks really get how slow. I’m not talking slow-food slow here; you’d starve to death waiting for me to cook up drafts.

Take my latest outing, “Notes on a Bruise,” (published in this summer’s issue of The Gettysburg Review), its opening incident occurred at the Alexander McQueen retrospective, “Savage Beauty,” in the Metropolitan Museum in New York, way back in 2011. I knew right then, while attending this exhibition, that I wanted–needed–to write about it, but I didn’t know how or, really, why.

Other scenes took place in the US before we moved to Ireland in 2012, and it was while we were in Ireland that I began a draft of an essay that contained similar material but had entirely different–and it transpired entirely wrong–thematic concerns. I made a second, more promising, attempt at coalescing my vague creative urges around this material while on retreat at the Tyrone Guthrie Centre in County Monaghan during November 2014. Then I let the manuscript fester for a while before subjecting it to several revisions–and to several title changes, from “Red” to “Swithering” to “Orlando” to “A Deliberate Chosen Strangeness.” After all this faffing about, I abandoned it for several months–heck no, a year–and turned my attention to another essay (since published in AGNI), before digging the ragged manuscript out again during late fall of 2015 and applying what I like to call my ‘hatchet’ edit; effective after any emotional baggage you associate with a piece of work has dissipated, and what you now feel is a combination of clarity, boredom, and ruthlessness. I had finally–finally–worked out how to write the blasted thing, and more importantly, I now knew why.  At last ‘done-done-and-dusted,’ I sent it into the world, and it was placed in The Gettysburg Review, a delight given that this journal published my first ever essay back in 2009. So, five years from end to end; from that first inkling that something would eventually need to be said about some theme as yet unknown, to the printed page.

The essay concerns notions of place and identity. Here’s an extract:

“I fled home when I was twenty-one as though my arse were on fire; like the essayist Alastair Reid, between Scotland and myself I saw trouble ahead. Glasgow felt too stifling, too sad. I grew up in a council house, not deprived, just ordinary–an urban childhood similar in class and experience to McQueen’s Stepney and Stratford. My parents’ marriage had been unhappy, my father indifferent, and my mother, now divorced, difficult to live with. First I pinballed close to home, to Perth and then to Edinburgh, but that wasn’t far enough; the weather was still awful and I was ambitious. So Arthur and I followed other Scottish exiles scarpering over the border and south to London, then seven years later we went west to Canada, and finally to the promised land, the United States, or as Scots tend to call it, vaguely, romantically, ‘America.’ ‘Aye, they went awa’ off tae that America,’ folks would say about those who’d left, never to be heard from again. When I was a child, therefore, America seemed like a kind of death, though a cheery one–and if you ever asked where precisely in the United States they had gone, you’d get a shrug in reply. America: not a destination, then, but an idea.”

“The events in our lives happen in a sequence of time,” Eudora Welty once said, “but in their significance to ourselves, they find their own order… the continuous thread of revelation.” And one of the trickiest consequences of revising and editing an essay with such a long gestation is that I had to allow my events to find this order, and decide where to ‘locate’ myself, the narrator, in time. Given that the key perspective of the first concrete draft of “Notes on a Bruise” arose while we were in Ireland, I decided to leave the narrator in the present tense and still located there, even though by the time of the final revision and publication I had left Ireland.  This is part of the difficulty and joy of the essay form: the essay I would write today would not be the same as the one I’ve written, or the one I would write tomorrow–using exactly this same material.