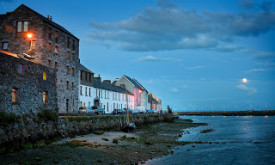 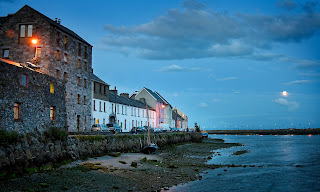 I always feel guilty if I’ve given a writer a mixed review, who turns out to be in the flesh (as suspected based on her work), as wise-cracking, self-depracating, and smart as A.M. Homes. I saw her in conversation with the essayist Elif Batuman about her recent novel, May We Be Forgiven, at the recent Cuirt International Writers Festival in Galway, a two-and-a-half hour drive west of my home in County Kildare through an empty undulating landscape of hillocks and bogs, pocked with beer-pee yellow broom. Elif Batuman was the perfect interviewer, her charming, scatterbrained exterior belied a shrewd assessment of May We Be Forgiven, and she asked, circuitisly, the questions that needed to be asked, beginning with the money: so much of the outcomes in this novel would not have been possible without the major characters having been cushioned by wealth. Homes talked about the issue of money in America, about how its often inverse relationship to happiness fascinates her, without actually answering Batuman’s question. Nevertheless, she had me in her corner from the get-go when she admitted she’d been editing her book backstage before giving her reading (I thought only I did that!), saying that the longer she is on tour “the more like haiku and less like a novel” it becomes. She found it funny that Batuman described her as mistress of “the suburban gothic novel,” given that she loves the countryside and loves the city, yet loathes the suburbs, though she find the suburbs to be the best petrie dishes for studying human nature. The many Chinese references in the novel were triggered by her teenage years living in Washington D.C. Her family’s connections to the government meant that she had played on the White House lawn as Watergate unfolded, and had by chance been interviewed on TV the day the giant pandas arrived at Washington Zoo. When asked what she thought of them, she’d replied, “they’re not so big.” Nixon became an important touchstone in May We Be Forgiven because she was intrigued about how someone so “pathelogically unlikeable” had managed to be voted into power.

“I am by nature an optimistic person,” she said in response to Batuman’s prompting about the most challenging aspect of May We Be Forgiven: its determinedly light tone. “And I am thinking and writing and functioning in a time that is fundamentally not optimistic.” Her world view has been irreparably shaped by seeing the events of 9/11 unfold outside her window in New York. After witnessing such horror in reality she felt that she need never fear horror on the page, because nothing she could write could match it. The only feasible response to it for her, as an artist and a human being, was hope. It is much harder to be optimistic than to be pessimistic, she believes, it is harder to drive a narrative in that direction, and she admitted that some of the first readers of early drafts of May We Be Forgiven, had tried to talk her out of some of its kookier plot diversions, but that she had decided to “allow myself to take the full ride.” The work galloped along at such a pace that she’d omitted to split it into chapters, being unwilling to “open and close” things but, at the insistence of her editors, she reluctantly went back to put in “the pee breaks.” She believes her novels are becoming more like her short stories, an attempt to maintain the “compression and intensity” of the short form over the long haul. Batuman declared that she couldn’t understand why May We Be Forgiven had not been “huge,” that is greeted with even greater fanfare and sales, which is, apparently, what Homes’s agent and publisher had expected. Homes admitted that, yes, she was disappointed, but she thinks it may be because she is “not doing what I’m supposed to do,” that women writers are expected to tackle the small domestic drama or chick-lit, and not take a swing at the big American social novel, and she quipped that the book might have done better if her first initials were short for “Jonathan.” Furthermore, she knows that upbeat endings tend not to go over well with the literati, who prefer misery – I think, sadly, this is true. And had we noticed, she said, that whenever a woman author is interviewed she always seems to be in her kitchen? And that the interviewer always make a point of remarking on what she is cooking and where her children are? When an audience member finally asked what the A.M. stood for, she replied “Almost Maybe.” Since her childhood she has been known as A.M., she explained, because her given name is Amy Michael, but “I am so not an Amy,” and I have to agree with her. This was a delightful event between two smart, engaged women, and though my take on her novel remains unchanged (after all my job is to consider the work, not the author), I now feel compelled to add her other books to my heap of ‘to reads,’ beginning with This Book Will Save Your Life and The Mistress’s Daughter. Darn that A.M. Homes and her contagious optimism! 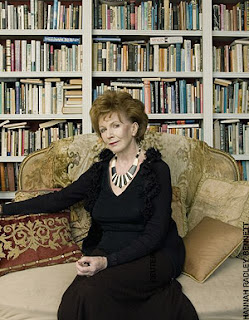 I spent two days and one night in Galway (refueling entirely on sugar, in a comfy hotel whose interior decor channelled Anthropologie-meets-brothel), so that I could also attend Vincent Woods’ interview with Edna O’Brien for RTE Radio. O’Brien is an articulate conversationalist, and dryly magnanimus about some of the indignities she endured from the Irish press and Catholic clergy before her current elevation to the grand dame of Irish letters. The full interview is available on a RTE podcast here (under Edna OBrien, 29 April) and a small clip is available here on YouTube. In the most recent issue of the Dublin Review of Books, Maureen O’Connor writes an astute and sympathetic essay about O’Brien and her memoir, Country Girl.

Before the O’Brien interview, Sheila Heti, author of How Should a Person Be, and Laurent Binet, author of HHhH, talked about the challenges of integrating real life events with fiction. Their moderator, unfortunately, indulged in a rambling interview style that seemed intended to showcase her own erudition rather than to engage meaningfully with these talented and interesting writers. This was particularly trying for Binet, given that English is not his first language, and frustrating to the audience as a whole. Both are spear-heading the trend toward the blending of fact and fiction, a natural literary development according to Binet, who said, “We are a post-Kundera generation,” therefore “writing is a conversation with the reader.” I wish we, the audience, had had more of an opportunity to hear their thoughts on craft and influences, though the moderator’s endless blarney did give me the opportunity to switch off and simply gawk at the stage, and I must say, knowing I’m being politically-incorrect and superficial, that the combination of Heti’s elfin, Blanchett-like poise next to Binet’s roguish, gallic charm was quite intoxicating. Any book publicist in the audience
would have wet themselves before such a tableau…