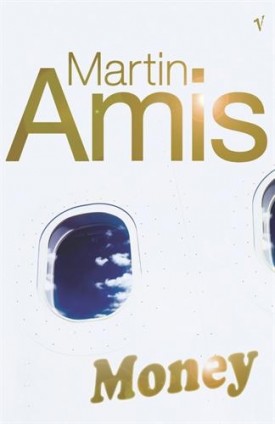 I’m trying to ‘tick’ off some books that I feel I really should have read by now—and there’s an awful lot of them. My latest ‘homework’ was Money (1984), Martin Amis’s comedy of the bling years of Reagan and Thatcher, often included in lists of the best novels (English language) of the twentieth century.

1982: the Royal Wedding looms and London is rioting. Dole queues form while Wall Street reeves up, pavements litter with broken window glass and run with Champagne. The half-English, half-American, John Self (making him transatlantic allowed Amis to skewer both cultures simultaneously), is a burnt-out wreck at thirty-five, an advertising executive turned movie producer who ping-pongs back and forth between London and New York, between his manipulative girlfriend and his smarmy American associates, massaging the egos of aging Hollywood icons and porn stars, and spouting his often on-the-money diatribes about how our formerly empathetic cultures of hard work and community spirit have been subsumed by greed. “Money is so near you can almost touch it, but it’s all on the other side of the glass. In my day, if you wanted to, you could just drop out. You can’t drop out any more. Money has seen to that. There’s nowhere to go. You can’t hide from money… Every time the quid gets gang-banged on the international exchange, some Arab chick gets a new fur coat. There are white money men too, English, native. They must be criminals, with their wads, the crap they talk, their cruel roasted faces. I am one. I am one of them, white, or at least sky-grey, with pub rug, and ashen arm on the Fiasco doorjamb, unsmiling at the traffic light, fat-brained with abuse—but holding money. I have money but I can’t control it… Money, I think, is uncontrollable. Even those of us who have it, we can’t control it. Life gets poor-mouthed all the time, yet you seldom hear a bad word about money. Money, now this has to be some good shit.”

In the mind of every reader is an imaginary line in the sand: on the one side lies satire and on the other crass or ignorant exploitation. Amis is more than aware of this line or he wouldn’t have made his hero (anti-hero)—the mercenary, avaricious, violent, narcissist John Self— such a pathetic, clueless, podgy, alcoholic klutz. While it is gratifying (and hilarious) that Self is a truly terrible tennis player (in his golfing check Bermudas and black socks), and that he receives his biggest ass-whipping from a pregnant woman, it highlights terrific authorial control that he is remains somewhat endearing, partly due to his intermittent chivalry, but mostly due to his irresistible banter in which he is candid about his own faults though serially unwilling to fix them (and Amis seemed to have laid odds that some readers will forgive much if the hero is kind to dogs). “The French,” says Self, “live to eat. The English, on the other hand, eat to die.” And he combines his picky diet of fast food (“fast food equals fast money. I know, I helped”), with an admirable amount of exercise: “I walk up and down the stairs. I climb into cabs and restaurant booths. I hike to the Butcher’s Arms and the London Apprentice. I cough a lot. I throw up pretty frequently, which really takes it out of you. I sneeze and hit the tub and the can. I climb in and out of bed, often several times a day…” Yes, he admits, “I am made of—junk. I’m just junk.”

Nevertheless, despite his clever manipulations of point of view Amis danced pretty close to my imaginary line, and even crossed it now and then, but…. heck, I forgave him (mostly) because the book is so damn funny and, despite cosmic levels of comic depravity, it hinges on an almost Sunday school morality. Money is a parable: a contemporary Canterbury Tale. “My theory is” says Self, “we don’t really go that far into other people, even when we think we do. We hardly ever go in and bring them out. We just stand at the jaws of the cave, and strike a match, and quickly ask if someone’s there.” The 1980s were the ‘self’ decade; the decade of wants, the decade of loneliness. I’m not sure much has changed beyond the same money changing hands.

Money‘s biggest drawback (apart from the rape jokes….), is, like quite a lot of meta-fiction by super-smart writers, it goes on too long—like a yarn without a punchline. Most readers will make the metaphorical connections between masturbation addiction, greed and narcissism after the first ‘hand-job’ but by the umpteenth that pun has gone a little limp. Martin Amis (a character in the book, not the author) says toward the end of the novel, “Toward the end of a novel you get a floppy feeling. It may be the tiredness of turning the pages. People read so fast—to get to the end, to be shot of you.” Yes, you’re right, I did speed up toward the end there, Marty. I’m glad I read Money—if only for the scenes of the tennis match and the night at the opera—but I’m glad I’m shot of you. (Tick!)