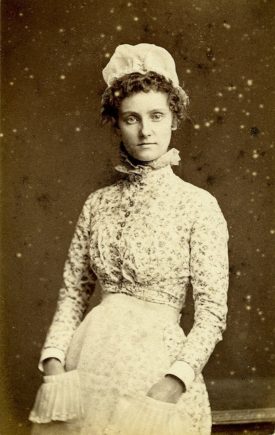 Molly’s bustle marks time as she makes her way upstairs. The lobby door slams behind Fergus. Annie sighs and pulls the cap from the pocket of her apron and tucks her hair inside it, ready to go back to the laundry.

She and Molly used to play the-gether when they were children, sewing dolls from rags while sitting on the floor of Molly’s clatty room-and-kitchen in Parkhead. One afternoon, when the girls were around seven, Molly’s ma came fleeing in and shoved her wages from the chenille factory up the chimney so’s Molly’s da wouldn’t drink all to nought. No danger of the coins smelting, the fire was barely lit. Both girls knew, growing up, though they never talked about it, that they had to escape the lives fated for them, and couldn’t be over fussy about how they went about it.

Before Annie left Glasgow to look for work in the north, a lad she fancied treated her to the cheap seats at the Theatre Royal. And there on stage was Molly. Billed under some hoity-toity name. Afterwards, Molly begged Annie not to tell her parents—they found out soon enough—and during Molly’s run Annie met her after the evening performances and they linked arms, swung their hips, and strode down Hope Street, pretending to ignore the entourage of smitten young men who gathered to wait at the stage door. But then Molly went on tour, and these racy, and somewhat dangerous, promenades ended, and Annie never saw her again. Not till this morning.

Annie, who know she’s no expert in such matters, suspects Molly’s not a great actress because in Glasgow she’d seemed to have an aversion to showing the audience anything other than her best side, but she’d a nice figure, a decent voice, and gamely took the comic parts turned down by those vainer than herself. She guesses it’s not fame Molly was courting, but the deep pockets of the front rows. Molly probably fancied that she did it for those siblings left behind, still huddled together on the alcove bed, while her mother scrubbed and scoured trying to hold back hunger and disease, but really she did it for herself. She couldn’t abide the thought of living the rest of her life in a slum without pretty things. Annie couldn’t blame her. She’d felt the same way.

Fergus Taggart hadn’t provided many pretty things, but Annie works hard enough for the both of them. He’s not a smart man but pliable, and lets Annie take charge realizing, sensibly, that they both benefit from her sharper wits. She filches a coin here and there off the books in case her father-in-law nags him back to the croft. Fergus is having doubts now, though, she senses it, given the lack of bairns. She can’t tell him how the smarmy lad with the theatre tickets scampered after he found out she was in trouble, and that the solution administered by Molly’s ma (without Molly’s knowledge), had left her barren, and damn near deid. Her blethering and mannerisms annoy him, but it’s awful hard to change your nature. She can’t go back to the cramped grime of Glasgow, that’s certain. She loves feeling her own limbs and resources stretch to fill the fresh air and independence offered by this small spit of land. Every Sunday she lights a candle praying to make herself indispensable so he’ll hesitate to cast her aside.

And now here’s Molly turned up. Hasn’t seen her for three years, or more. And Jimmy Malcolm tried it on with her once but laughing at him had been enough to put his nose, and his breeches, out of joint. Rumor says his father, the Laird, is just the same. The silly bissum—there’s no hope of a marriage. And that outfit. Typical Molly, she’d never understood the difference between good quality and good taste.