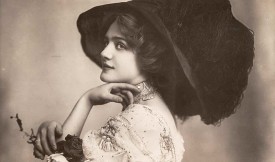 Many years ago I visited Kilmartin in Argyll, western Scotland, and overheard some local history that inspired me to sketch a yarn that failed to thicken into ‘story.’ Nevertheless, given I’m heading back to Argyll in the next few days, I thought, just for fun, I’d share it here (in five parts which I’ll post in installments over the next ten days or so). Think of it as lightweight entertainment… a sort of blether-divertissement…

Judging by her hat, she could be an actress—he’s seen hats like that on yon brownish postcards his son Ruaridh brought back from some operetta ‘entertainment’ in Auld Reekie and hides in the gamekeeper’s bothy—and everyone knows actresses are only one step up from whores and, although the Laird has said nothing against whores in particular, there’s no doubt in the boatman’s mind they fall under the category of ‘trade’ and will, therefore, not be allowed in the castle.

The coachman who’d brought her from the railway station places a large trunk beside them on the quay. He’s waiting for some additional recognition of his efforts but the boatman knows he’s wasting his time, her eyes are fixed on the opposite shore. Reflections from Colm Castle’s narrow windows stitch through morning mist spooling across the Sound of Jura. The coachman sighs and climbs back on his trap, the steaming horse stamping its feet as though party to his disappointment.

A pretty lassie, the boatman thinks—sitting back down on the upturned creels—but not from Kilmartin, from Glasgow or some such big toon in the south and awful young to be traveling alone. Her eyebrows are over-dark for a redhead, and set in skin skimmed from the top of the churn which, on closer inspection, reveals a liberal sprinting of freckles stubbornly visible despite a film of soft powder. The boatman disproves of the fashion for paint but admits it suits her. She begins to pace back and forth at the edge of the quay, twirling and straightening the silken cord of a small reticule clutched against her waist. He fingers the pipe in his pocket, wondering what she’ll do next, as she seems to be in a bit of a fankle.* It would be unfitting to leave her alone but he doesn’t want to be burdened with her overlong—despite the blether value. He’s suffered such stubborn, clenched profiles often enough from four daughters of his own.

Is that an Inn, she says, pointing at the dour sandstone building bordering the machair.

She lifts her chin, then her skirts, and strides off. The boatman looks down at the abandoned trunk.  He rises stiffly, muttering in Gaelic, then grasps its rope handle. He begins to drag it behind him, following her snappy gait as she attempts to dodge the salt water cupped between the cobbles, her lilac kid boots already purpling with damp.

*’fankle’ – Scots: a predicament, a tangle, a pickle, a spot of bother…