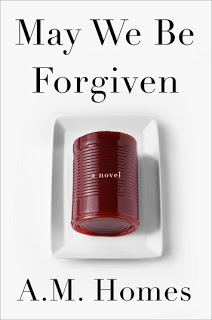 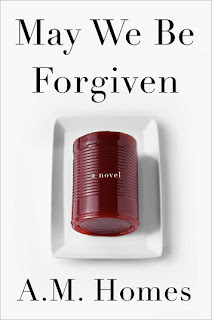 “‘Stay, I tell myself,” thinks Harold Silver, at the end of May We Be Forgiven, “…take a breath. Stay here, in the moment.” His somewhat cliched self-exortation takes place at a Thanksgiving dinner exactly one year after the Thanksgiving dinner which opens this latest novel by A. M. Homes, author of, among others, The End of Alice, This Book Will Save Your Life, and The Mistress’s Daughter (a memoir) – a writer so prodigiously talented she can’t seem to sit still.

I am hard-pressed to name another book with as much plot packed within its first thirty pages: after a comic scene depicting familial loathing, it moves swiftly to a catastrophic car crash, then assault, adultery, and attempted murder. George, Harold’s brother and the prime instigator of this mayhem, is a wealthy, narcissistic TV executive whose shelves groan under the weight of his entertainment awards due to an ability to “parse popular culture,.. to give us back to ourselves.” Harold, our narrator, finds himself cleaning up George’s mess, driven not only by feelings of brotherly responsibility but by guilt, having played a supporting role in some of these shenanigans. I read May We Be Forgiven while succumbing to a nasty chest infection at the AWP conference in Boston. Its frenetic pace complimented the almost-hallucinatory state in which I trolled the lectures and book fair, like a modern-day Typhoid Mary.

It becomes apparent that the wham-bam opening is merely a set-up for Harold’s transformation, rather than essential grist to uncover what ails George, though the remaining four-hundred-and-fifty odd pages are hardly parched of incident, and unfold like a picaresque. Harold loses his job and his marriage in swift succession, suffers the first in a series of physical calamities, and becomes the guardian of his brother’s two children, Nate and Ashley, whom he had considered “absent of personality, absent of presence,” with the “only thing in motion their thumbs….” From a man with negligable family (bar his ex-wife who was so smart she rarely left her office), he becomes the patriarch of rag-tag gaggle that, along with his niece and nephew, includes some Chinese restaurant owners, the geriatric parents of a gal he picks up in the A&P, a swinger, another boy, (more collateral damage from George), a dog, and several cats. The narrative perpetually springs new shoots like an over-fed plant, about, for example, the dangers of on-line dating, the beatific nature of dog-walkers, and the estate-planning quagmires triggered by marriages in retirement homes, and, before we know it, we’re visiting Colonial Williamsburg, going undercover in a clandestine government raid, and party-planning a bar mitzvah in Africa. There are walk-on roles by a repentant policeman and a Scottish headmaster, by social workers and psychologists galore, and we visit George under house-arrest in a secure “campus” with rooms that could have been “designed by a Martian who reads books in translation about American history...” before he is transferred to “The Woodsman.., an inexpensive self-policing penal colony.”All this should have given Homes more than enough opportunity to satirize “the postwar prosperous-American-dream America,” but Harold also has a scholarly obsession with Richard Nixon and undertakes a project to edit a secret stash of Nixon’s short fiction. Cue deep-throated strangers in elevators, and fictionalized funny-dreadful excerpts.

Harold falls in love with his cobbled-together clan; with the children especially, of course, all of whom are, naturally, much wiser than the adults, with Nate, given he knits and may be gay, being the wisest of them all. (Such characterizations may gratify political-correctness but undercut satirical potential and deny the messy complexity of human nature.) Every so often someone gives a speech at a school event or a barbecue, handily providing a platform for the author to impart sage advice, such as, “Are you someone working within your culture or tradition, or are you someone who feels outside of it, left behind? (on the nature of community), or “we don’t burden each other with our feelings” (on marital success). “Life, itself, is currency,” Harold muses, “It seems pointless to go on for the sake of going on, if there isn’t some larger idea, some sense of enhancing the lives of others.” A noble thought, nevertheless it’s worth noting, on the subject of currency, that much of the fallout from the various misadventures is cushioned by George’s money, therefore utter psychological and economic disaster is more or less avoided, and, furthermore, Harold slips into parenthood as easily as slipping into his favorite old slippers, so, by the end of the book, despite murder, mayhem, and the mucky machinations of governments and corporations, everyone all but joins hands and sings kumbaya. Excluding George and a few minor shady characters, the reader may be left wondering who, really, requires forgiveness and for what?

I believe it was James Wood at AWP, who said that one of the most critical aspects of a book was consistency of tone, and this is where May We Be Forgiven proves most problematic because it begins as satire and ends dangerously close to self-help. That deliciously wicked-black opening, so gripping because of the hair-raising number of balls Homes throws in the air, gradually swerves toward feel-good-light, a turn not driven by organic developments in character or narrative but by the author herself, who seems determined to remain chipper. She is obviously attracted by the ironic possibilities of dealing with very bleak material because she allows some truly awful things to happen, yet rather than slow down and mine deep into their causes and consequences (and she certainly has the chops for it) she speed-bumps up and over onto ‘what happens next.’ I suspect she may be a Dickens fan, given her fondness for a multiplicity of characters, sub-plots and diversions, but perhaps more Martin Chuzzlewit than Bleak House, as May We Be Forgiven is not a true tragic-comedy, (akin to a Nabokov or Saunders), but a soap, albeit a soap of the highest order.

If I seem dismissive, I apologize, this is not my intent. Homes is a writer of seemingly endless inventiveness, a mistress of dialogue, and with the determination (praise be!) to entertain her readers. And who wouldn’t like a narrator who muses that “when the Jews left Egypt, they took with them the tins of Danish Butter Cookies,” or theorizes about presidents, perceptively, that “there are two kinds, ones who have a lot of sex and the others who start wars.” Still, while romping through the book whooping with laughter, I couldn’t help thinking about Robin Williams, (bear with me now), a supremely talented actor and comedian who seems to specialize in movies where his improvisational brilliance melts into schmaltz, and whenever I’ve watched him being interviewed I’ve shared the interviewer’s frustration, because he never stops farting about with the funny voices and smart-ass jokes to answer the damn questions. It’s as though Homes, like Williams, is afraid of her own talent, and though fascinated by the dark, she’s seems afraid of that too. Stop, I want to say to her, just as I often say to my three-year-old daughters when they have ants their pants. Take a breath, count to ten. May We Be Forgiven is a honky-tonk performance by a potential virtuoso.