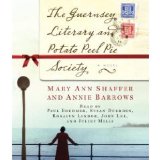 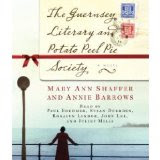 Mary Ann Shaffer’s and Annie Barrow’s novel The Guernsey Literary and Potato Peel Pie Society had been hovering in my peripheral vision for so long, in book stores, on review pages, that I had avoided it, feeling it had already garnered more than enough attention. But when a good friend recommended it, I succumbed and chomped through it in a day or so. It made pleasant reading, I enjoyed it, (no, really, Rhea, I did,) and I learned stuff too. Its retro combination of sugar (mild romance and Mitford-esque humor) and green vegetables (educational content and sturdy decent folk) reminded me of those Nancy Drew type novels I ploughed through as a teenager, though the anecdotes about Nazi occupation had more bite, and the romance less flush and burn. It’s BBC/Masterpiece Theater material, and I couldn’t stop myself from casting the sadly lost Natasha Richardson in the leading role.

Two things however did baffle me: the lack of a recipe for that much-vaunted potato peel pie, and the apparently dizzying efficiency of the postal system in post-war battered Europe. Who knew one could conduct a triangular correspondence between the Channel Islands, old Blighty and the far Aussie-Antipodes, at speeds rivaling a 3G network?