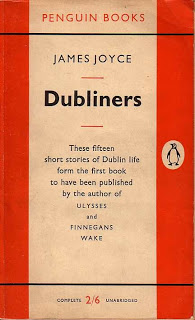 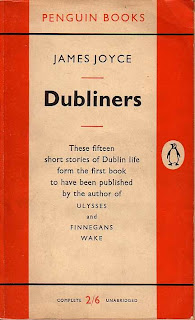 “I heard the rain impinge on the earth, the fine incessant needles of water playing in the sodden beds.”

On a damp and chilly July day I crossed over the canal where two boys meet in “An Encounter,” the second story of James Joyce’s Dubliners. A run-in with a predatory tramp ends their adventure playing hookey from school, leaving one boy to feel “penitent” toward the other, for “in my heart I had always despised him a little.” I skirted St. Stephen’s Green where a naive maid rendezvous with the swaggering Corley, one of “Two Gallants” who, despite having a head that was “large, globular and oily,” manages to seduce her into theft. My copy of Dubliners still boxed (we’ve yet to unpack), I bought another at Hodges Figgis on Dawson St. (editions are cheap and widely available, it’s Dublin’s “One City, One Book” pick for 2012), before heading to O’Connoll Bridge. Over the the ink-gray Liffey thunders a horse cab near the end of “The Dead” and one of its occupants, Gabriel, flushed with desire for his wife, raises his hat to the statue of the father of Irish emancipation, unaware he is galloping toward his transfiguration. Although I had been in the city a few short weeks, any adjustments between the Dublin of my imagination and reality were minor, and would daily decrease. “Joyce’s stories are miserable,” remarked my sister, and they are, but often it’s the context that’s bleak – class struggle, poverty, political strife,  religious oppression – not the people, which is why on my first visit a few months before, while sitting in a coffee shop watching shoppers and bar hoppers, flower sellers and buskers banter and jostle despite the current economic debacle – watching the Irish fiddle while Ireland burns – I called my husband to say “yes, I think I can live here.” 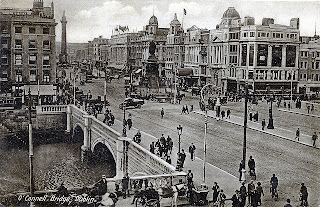 Dubliners was first submitted to a publisher in 1905, but didn’t appear until 1914 due to concerns over some of its franker content. Encountering it almost one hundred years later, a new reader may find it staid or flat, simply because it set so many precedents of form that became standard in the modern short story: the notion of a linked collection where characters overlap from one tale to the other to build a portrait of entire society, the use of concrete muscular language, the importance of political and social contexts, the masterful control of free indirect style (“Lily, the caretaker’s daughter, was literally run off her feet“), the incidental or minor plots, and narratives that do not turn but tilt toward meaning. Mrs. Mooney, a butcher’s daughter, owns “The Boarding House” and deals “with moral problems as a cleaver deals with meat…”, while subtly pimping her daughter to her upwardly mobile lodgers. In “The Mother,” “Miss Devlin had become Mrs. Kierney out of spite… (and) “sat amidst the chilly circle of her accomplishments.” Two old friends meet in a pub in “A Little Cloud,” one of whom has emigrated while the other stayed behind, and “patronizes….with his friendliness just as he was patronizing Ireland with his visit.” Joyce pinned the locals to the page so effectively it makes it hard for contemporary Irish writers to outrun his shadow and you rarely read a review of their books in which his name is not mentioned, to their credit or detriment.

I’ve read “The Dead” many times, but this was my first encounter as Joyce intended, with the preceding thirteen stories acting as a prelude to what is, essentially, a novella. On its final pages, everyone the reader has met so far seems to crowd into the shadows of Gabriel’s and Gretta’s hotel room like silently lamenting shades. The story is simple enough. The middle-aged, self-absorbed Gabriel attends a party with his wife, a woman initially peripheral to our vision because she is peripheral to his own, and he fears Gretta may make a fool of herself, or rather make a fool of him, for he is entirely preoccupied with what others think of him and terrified of “taking up the wrong tone.” But the party goes well, and his speech is a success, and pruning with self-satisfaction and post-performance adrenalin, feeling frankly, a tad horny, he looks around for the little woman and, by Jove, there she is, albeit distracted, and “He asked himself what is a woman standing on the stairs in the shadow, listening to distant music, a symbol of.” A remarkable line, remarkable because its structure hints at the modernist direction Joyce’s prose will soon take, remarkable because it intimates Gabriel’s narrow intellectualism, seeing his wife as both object and symbol but not flesh and blood, and remarkable because it acts as the pivot for the entire story. Back at their hotel, Gabriel’s hope to round his evening off with a connubial quick-y are scuppered by her shattering revelation. He realizes he knows nothing about the woman he married, and even more harrowingly, he has never really loved her, or loved anyone, the way she had once loved and been loved. “A shameful consciousness of his own person assailed him. He saw himself as a ludicrous figure, acting as a penny boy for his aunts, a nervous well-meaning sentimentalist, orating to vulgarians and idealizing his own clownish lusts…” Life is short, success is transitory, we can never know another human being, mortality is the only absolute. Poor Gabriel, so much to take on board in one short evening and “his soul approached the region where dwell the vast hosts of the dead.”

“The Dead” is a call to love and a boot in the guts, and the only sensible option after reading it, other than finding a canal and filling your cardigan pockets with stones, is to put the kettle on for a stout cup of tea. So I left the bridge and headed toward the Post Office to pay my respects to Connolly, Pearse, and MacBride, my head down and hood up against the low-slung weather, the tourists and locals eddying around me, blurring in my peripheral vision, gradually “becoming shades.”