The Daily Telegraph have just published a wonderful interview with Nobel Prize Winner Doris Lessing, still feisty and controversial at eighty years old. Here’s a sample of her refreshing straight talk. On winning the Nobel: 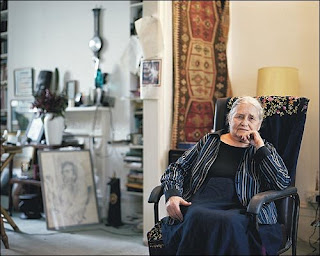 “The Nobel Prize is run by a self-perpetuated committee. They vote for themselves and get the world’s publishing industry to jump to their tune. I know several people who have won and you don’t do anything else for a year but Nobel. They are always coming out with new torments for me.“
On her mother: “We hated each other. We were quarrelling right from the start. She wouldn’t have chosen me as a daughter. I was landed on her. I must have driven her mad. She thought everything I did was to annoy her. She had an incredible capacity for self-delusion.”
And on war: “Why do we allow wars still? Now we are bogged down in Iraq in an impossible situation. I’ll be pleased when I’m dead. That will let me off worrying about all these wars.”
Rock on, Doris! (Portrait of Doris Lessing by Reme Campos)