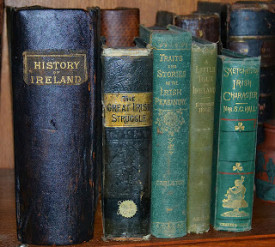 In honor of St. Patrick’s Day, I thought I’d offer a menu of some of the enjoyable Irish writing I’ve digested over the last few years, and a tasty stew it is, and in no particular order (and those I’ve reviewed are linked, though you may need to scroll down after you click). First-to-mind favorites must be Roddy Doyle’s hilarious and heartbreaking Paddy Clark Ha! Ha! Ha! and pretty much anything by William Trevor, with the novels The Story of Lucy Gault and Felicia’s Journey, and the collection After Rain being particularly fine. A similar lyrical voice can be found in Sebastian Barry’s The Secret Scripture superior to his follow-up On Canaan’s Side – not due to any failure in prose but because I found the plot so contrived as to beggar belief. Colm Toibin’s Brooklyn was a commercial and literary smash, a little cooler in tone than Trevor and less effective for it (I thought), though some of his stories in The Empty Family were quite wonderful. Moving further along the spectrum from warm to cool to intellectual we bump into the prolific Mr. Banville and his more relaxed (and perhaps more enjoyable) alter-ego Benjamin Black. My favorite Banville is The Sea, and my favorite Black is Elegy for April.
Ireland’s history demands a deft touch and two wonderful novels dealing with the early twentieth century include Elizabeth Bowen’s The Last September and J. G. Farrell’s disturbing comedy of the absurd, Troubles, posthumously awarded the ‘lost Booker.’ For memoir try Nuala O’Faolain’s Are You Somebody?, for Angela’s Ashes-lite try Brendan O’Carroll’s The Mammy, and for devilish satire masquerading as twee village yarn, you could do no better than Patrick McCabe’s The Stray Sod Country. I think I may be the only person who hasn’t read Emma Donahue’s Room because its subject matter makes me feel queasy though I am a fan of Slammerkin. (Note I’m not bothering to mention any of the great names here, like Joyce, Beckett, Stoker, Wilde, Yeats et al, because I know everyone will have ticked them all off long by ago, though I do like to go back now and then and re-read The Dubliners.) The two Irish novels currently in my ‘to read’ pile are Anne Enright’s The Forgotten Waltz (I loved her miserable / funny Booker-prize winning The Gathering), and Joyce’s Finnegans Wake – a book that has been festering in that pile nigh on twenty years or more. I’ll get around to it, I will, to be sure…..