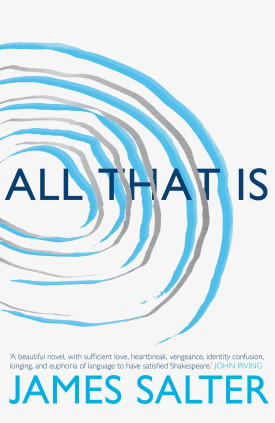 After reading Lolita I would never have presumed that Vladimir Nabokov was a pedophile, after reading The Wasp Factory I would never have presumed that Iain Banks was a psychopath, but after reading All That Is, a novel set in the middle to late twentieth century charting the life of a misogynistic plonker I couldn’t help wondering if James Salter is… well, you get my drift.
A key responsibility of the reviewer is to never confuse a writer with his or her narrator and / or his or her protagonist, because the writer’s deepest creative work is done in that magical gap between a character’s perception and the narrator’s perception, or between a character’s perception and our perception; between our collective understanding of human history and human nature and the character’s or narrator’s limitations. It is here, in this essential sliver, in this sweet spot, that writers layer irony, satire, tragedy, comedy; it is here that readers may experience empathy, epiphany. In James Meek’s essay, “Memories We Get to Keep” in the June issue of the London Review of Books, Meek gives a clear assessment of Salter’s strengths, such as those unmistakable languid sentences and his jump-cuts across time, delicious traits that I heartily admire, while paying particular attention to what Meek terms (with, I think, admirable tact), Salter’s “mobility and occasional ambiguity of perspective.” It is this ambiguity of perspective that I tussled with while plodding, stoically, through All That Is, driven by a need to recalibrate my bafflement over its sometimes sloppy craft and lack of irony with its mostly positive critical reception. I assume this is a classic case of, if you’ll forgive the cliche – given that I’m a member of the weaker sex – it’s not them, it’s me.

Reading a novel about, say, the 1970s, that was written in the 1970s, I expect to see 1970s attitudes reflected and will compensate accordingly, but when I read a novel written in the twenty-first century about the 1970s, regardless of whether it is written in first person, close third or omniscient, I expect to find nuance or irony sitting in that ‘sweet spot,’ opening up the possibility for comedy or satire (as in Martin Amis’s The Pregnant Widow). It’s been thirty-four years since Salter published a novel—(do we praise because we are excited by the fact that he managed to write anything at all? Or is it because his earlier works are so marvelous that we’re still basking in their glow?)—but All That Is reads as though Salter is unaware that time has passed, and that times have changed. Bowman’s dour, facile perception of the women he beds with such relentless cheerlessness should not be an issue to any intelligent reader—it is not the responsibility of the writer to create likeable characters but to create characters that are complex and believable—the issue arises because every other male character shares or reflects Bowman’s beliefs, resulting in a narrative demeaning to both sexes. Despite having created a fluid point of view that moves at will between his characters, Salter’s perspective remains, essentially, like Bowman’s, one-dimensional.

It can’t be denied (provided you’re not over-fond of clarity) that some—indeed many—of Salter’s sentences have a lazy beauty, especially in his descriptions of nature or in his swift characterizations. “It was a barefoot life, the cool of the night on the floorboards, the green trees if you stepped outside, the first faint cries of the birds,” (walking on trees is trickier than walking on grass I grant you, but this is a pretty line), or, “day was rising, a pale Pacific dawn that had no real horizon with the tops of the early clouds gathering light,” or “he was an encyclopedia salesman at this stage, but even his shirtsleeves, walking around the house looking for cigarettes, he gave the impression of someone for whom life would work out.” But then we come across sentences like these (all plucked from the same two pages): “Spectators in bulky clothes lined the fences with children running about and dogs,” (are the children ‘lining’ or ‘running? And the dogs what?’), or; “They could hear her coughing in the bedroom, Larry and Harry, they were veterans of musical theater… Vivian liked them, they had met in the chorus,” (Harry and Larry had met in each other in the chorus, I presume, rather than met Vivian in the chorus), or, my favorite; “In her well-fitted riding clothes he imagined her as a few years older with certain unfatherly thoughts though he was not her father.” I was trying so hard to calculate the probability of a man who is not her father having anything other than unfatherly thoughts that I completely missed the dangling modifier until it was pointed out to me by a similarly frustrated reader.

Of course modifiers aren’t the only things dangling in All That Is, given that it is the sexual picaresque of editor-about-town Bowman and his lifetime search for the woman who could sustain his “feeling of utter supremacy.” I couldn’t shake the suspicion that Bowman (Salter?) subconsciously considers cars and horses akin to women, a symbolism set very early on when one lively blonde is met in a dealership, (the Palmetto Ford), while Bowman describes his wife as a “a pony.” Another male character becomes momentarily mesmerized by a shopgirl working in a window before marrying “not the shopgirl but someone like her,” as though he’d admired a Toyota Camry then gone off to buy the latest model. As soon as a woman steps onto the page she is assessed for ride-ability, not only by Bowman but, apparently, according to that ambiguous perspective, by everyone. One woman is so “enormously fat” that “no-one would ever think of marrying her,” another “liked male authority, especially his,” while a third was “still young enough to be naked.” Meanwhile a male character’s fear of losing money was “nothing like the fear a woman has.” When starting out as an editor Bowman dismisses one of his female colleagues as a potential bedmate due to her acne scars then, later on, when he discovers that she had, and still has, a crush on him he considers sleeping with her, despite her dings and dents, because it “was what was her due.” As All That Is canters down the home stretch I sensed Salter’s editor may have dropped him a hint to make some concession toward feminism but it’s countered when a male friend remarks to Bowman that “the thing is, they want a life like ours. We can’t both have a life like ours,” (God forbid, though this quote may be the closest Salter gets to wit), while Bowman remarks to women friends after attending an event starring Susan Sontag that “all powerful women cause anxiety…it’s what anybody thinks.” To Bowman and our narrator ‘anybody’ seems to be a collective male pronoun. All of this material has the potential to be very funny, but Salter doesn’t do funny, which is unfortunate because I can forgive a writer just about anything if they make me laugh. Decidedly not funny, indeed barf-inducing, is a scene in which Bowman describes a friend’s six-or-seven year old daughter as having “a soft seductive color,” a remark offered without any self-reflection, which convinced me that Bowman would most likely tuck that little girl’s name away for future reference and return in ten years so as to give her the honor of fucking her. This reminded me, to Salter’s detriment, of a scene in American Pastoral by Philip Roth in which a father describes seeing his young daughter naked, and manages to convey all the tenderness and sexual ambiguity and protectiveness and wonderment and fear a heterosexual man may feel when seeing a naked young girl who may or may not be of his own flesh and blood. Roth can sometimes be patriarchal but his tendency is balanced and neutralized by his empathy and his far superior craft. If Roth were a sponge filled with water that you squeezed real hard (draining away all that humanity, all those extra words, all those sometimes soaring lines) you might be left holding Salter.
Bowman seems to share Salter’s belief that sex is the great game of adult life so it’s not surprising that when it comes to revenge sex would be his weapon of choice. Yes, sex is wonderful, transformative, extraordinary, a damn fine way to waste an afternoon—I’m not a prude—but it is the disconnection between sex and understanding, between sex and humanity, combined with Bowman’s confusion between sex and love (I know by making this distinction I risk sounding positively girly), which makes Bowman’s life a tragedy. Bowman is a shallow man, or to borrow Meek’s conclusion about the overall tone of All That Is, he is “boastful.” He thinks he ‘loves’ women but all he actually wants is to have their bodies available to him (and preferably passive or half-asleep) because this make him feel powerful, feel “above other people,” that he is “living another kind of life,”and he is not wise enough to know the difference. Writers are allowed to create shallow characters, of course they are, but when I read Salter’s remark in the Los Angeles Review of Books that his novel’s title could be translated as “What Mattered to Me, or What I Know of the World,” I couldn’t help wondering due, once again, to that damned ambiguous perspective, is he only referring to lonely, blinkered Bowman? Because if Salter imagines that this is all that is, how sad is that?