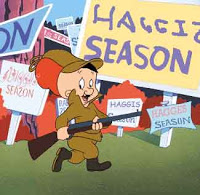 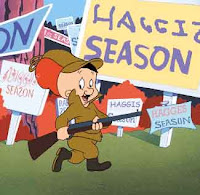 At long last, after twenty-one years, the American government has decided that haggis is not a threat to health and safety, and it is once again legal to import something ‘offal.’ Well, thank goodness for that, or hells bells, depending on your point of view. Whatever – it will still probably be plain mince and tatties for tea tonight. The Guardian have a nice introduction to Burns on their books page, and here’s a little smattering of his work to celebrate his birthday:

“Below his stairs lie James’s banes
O death. it’s my opinion,
thou ne’er took such a blether’in bitch
Into thy dark dominion.”
Talking of which, I fell over an article recently about the chair known, winningly, as “the Bletherin Bitch” with a direct connection to this “Epitaph on a Noisy Polemic. Now owned by a Glasgow literary society, The Ours Club, it once belonged to the aforementioned Jamie. Note, Burns wrote it for Mr. James Humphrey, not his wife. There is obviously a story here, that has 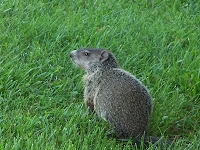 been lost to time.
Stanley Robertson, the last of Scotland’s Traveller storytellers may have known it, or could have spun one to fit and to order. For an explanation of who the Traveler storytellers were, and Robertson in particular, see this Scotsman article. The Economist magazine published a wonderful obituary of Robertson that is available on line, but with a fee, so I’ll try when I have time, to quote some more from it, than I have here:
“He was a Traveller, one of that mysterious band who were neither true Romanies, nor settled citizens, but roamed the roads of north-eastern Scotland in tents and carts…. they would camp, light a ‘glimmer’, sings songs and tell stories… The language was a mixture of Scots, Doric, Gaelic and Cant, or Traveller’s dialect; he called it “one ancient tongue”, and passed it on as a kindness, not for money.”
(And yes, that is a rare photo of an actual haggis…)