I was browsing in Daedalus bookstore when I came across a long out-of-print copy of Beryl Bainbridge’s 1976 novella, A Quiet Life. I chuckled with greedy satisfaction, and sneaked it over to the cash desk in case some other discerning reader decided to put up a fight, then went home and devoured it in an afternoon. Every so often, when I’m suffering from reviewer’s indigestion caused by masticating too long on big, self-important books, I go and lie down in a dim room with a large glass of water (or some other clear, refreshing liquid) and submit myself to the cool, crisp, smarts of a great British bird, like Bainbridge, Lively, Brookner, Fitgerald, Murdoch or Spark. 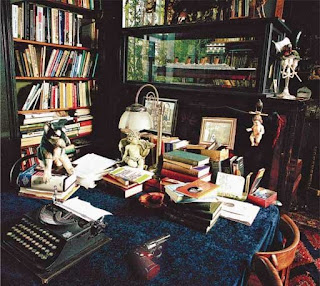 A Quiet Life tells the story of a gloriously dysfunctional family at the end of the Second World War. The father is melancholy, the mother romantically inclined, and the son is decent, prudish and distraught, mostly over the actions of the daughter, Madge, who is ballsy and unconventional. There is no internalising of feelings here – just a lot of bad behaviour and hilarious dialogue. Bainbridge’s story isn’t necessarily realistic but it is incredibly alive – it has a form of hyper-realism that lifts it off the page to smack the reader around the head.
Bainbridge was the subject of a documentary made by her grandson, and she also has one of the most attractive and intriguing writers rooms, as seen here, the contents of which she describes in the Guardian’s intriguing series.