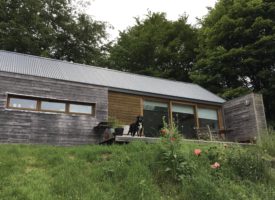 In the middle of June, I packed books, pinboards, a laptop, wellies, a holdall of tatty clothes, and Dougie the dog into the car, and headed for the Scottish Borders. In the last year or so—since moving countries again—my grasp on the craft has become ever more tenuous and I began to wonder, as do many writers at times, I’m sure—I hope?!—whether I should simply let go.

I’d booked a one week retreat at the Heriot Toun Artist’s Studio, a lovely purpose-built, live-and-work space for visual artists and musicians in a winding glen halfway between Edinburgh and Galashiels. Nestled high into the hillside above an old yellow farmhouse, the studio is bordered by a sheep-field on its left and rear, and, on its right, a burn has scoured a deep cleft, hiked up and down by brown cows.

Despite having been on residencies before, I can never shake the delusion that I’ll arrive, unpack, sit down and (voila!) create. That’s not what happened because that never happens. Exiting ‘real’ life for solitary time with the page is necessary but discomfiting to me; ‘re-entry’ is even harder. Yet over the first three days, I tumbled beyond my usual creative constipation into an almost disabling trough of what I can only describe as grief, which not even the familiar balms of music and reading could entirely overcome (see a lovely article about reading and grief by Dylan Landis). In April I’d avoided celebrating a milestone birthday—it seems I can’t resist a cliche, even one as hackneyed as the mid-life crisis—and instructed my family to pretend it wasn’t happening. On the day following, I sulked like a child who’s scuppered a potential treat by throwing a hissy-fit.

Now, pacing the studio, I was in danger of again (to quote my mother) cutting off my nose to spite my face. I couldn’t stop fretting about having left the children for a week while simultaneously aggravated that a week wasn’t nearly enough—I needed a fortnight, a month, a year, years! I wrestled with time—always a hapless endeavor—over what I thought had been lost; I wasn’t living the life I’d imagined but something more complicated and compromised. Many things, good and bad, seemed to be getting in the way (I thought) of my vocation, or—hells bells—what if this was not my vocation at all? I forgot that it’s within life’s complexity and abundance of both good and bad—within the gap between what we thought would be and what actually is—that the magic lies, and so, naturally, I failed to move from tetchiness into the so-called blessed unease.

Why Scotland still has June brides, I’ll never know; it’s often the dampest month of the year. And poured it did, a northern monsoon. The weather may have confused the seasons, yet not the earth. Pre-dawn darkness tends to ease me into a writing rhythm but every morning when I dragged myself into the studio at 5am to raise the blinds, I found the blasted midsummer up before me. A huge hare kept it company, munching wildflowers, disappearing sometime between my first and second coffees. Sunlight would flirt briefly with the clouds, before the day’s sheets of rain began to ripple by like sails. When we went out for our walk, Dougie and I would find sheep in the garden, which we shepherded back into the field, securing a gate left perpetually and mysteriously ajar. Trees arched over the steep cleft like a row of umbrellas, and we toddled back and forth beneath them, inmates of an emerald exercise yard. The surrounding bracken and gorse echoed with mysterious ‘ratchets’ and ‘gulps.’ (Capercaillies? I doubt it; they’re so rare as to be protected. Are pheasants really that randy, and that loud?) Sometimes we ventured down past the farm onto the single track road, pressing ourselves against the high hedge as Landrovers and trailers belted by, driven in the characteristic fashion of those who believe themselves immune to catastrophe simply because they know the bends, having forgotten some bends are blind.

Twice I ran away; first, to the Mainstreet Trading Company, an independent bookstore in St. Boswell’s; second, to Sir Walter Scott’s Abottsford, where I stared at the desk in the dour, wood-panelled study at which he’d tried to write his way out of debt, blood, no doubt, bubbling from his forehead with the effort. I envied his garden, admired his fortitude, resented his word count. The Borders Book Festival was on in nearby Melrose. I gave it a wide berth. Sometimes you can’t bear to hear other writers’  voices when you’re struggling to hear your own. And I might’ve been forced to be sociable. I didn’t feel sociable; I was cranky, not to mention unkempt. One of the joys of retreats is the absence of those irritating daily chores like vaccumming and laundry and, in my case, soap and water. The negative flip-side, of course, is the absence of excuses to avoid planting my arse in the chair: “oh, I can’t start now, I’ve an entire house to renovate”, “no point finishing that up, school’s out in half-an-hour,” “I’d planned to work this morning but I’ve offered to volunteer here instead….” The retreat was becoming a rout, forcing me to accept that nothing was standing in my way—or had ever stood in my way—but me.

By day five I accepted that my muse had well and truly buggered off, so I put aside plans for a new essay draft and resigned myself to grunt-work. I’d brought books for research; doggedly, I took notes. I couldn’t hack long stretches of fiction, contenting myself with Fred Ullman’s bittersweet novella Reunion, which I’d picked up in St. Boswell’s, and revisiting essays by Sebald, Baldwin, Smith, and Woolf. Poetry helped (doesn’t it always?) with the grief and regret and my huffy self-absorption— because although it magnifies it, it articulates it, too, and articulation always soothes. And poetry steadies my temporary shakes of faith in language. Anne Sexton, Elizabeth Bishop, Sylvia Plath, Liz Lockhead, and Robin Robertson offered solace, and I found Niall Campbell‘s mesmerizing Moontide on a studio shelf. I dipped back into Annie Dillard’s The Writing Life, a book I carry like a talisman, though Elizabeth Gilbert’s Big Magic proved disappointing, too derivative of that helpful if cheesy classic by Julia Cameron, The Artist’s Way. Between readings I set myself pathetically low word count targets on a short story for the remaining three days—I cringe to share them, so I won’t— resigned myself to doing the bare minimum. I discovered I was okay with that, with simply showing up and laying track. And slowly, track was laid. Now and then I’d glance at the large, haunting photograph of a shieling (a basic shelter) on the Isle of Lewis that hangs on the studio wall, taken by Mhairi Law; it felt like a visual parallel of my predicament. This image provided such comfort I ordered a smaller print as soon as I got home.

It was great to have Dougie there—so many retreats don’t allow pets—and I love him to bits, but otherwise he was no help at all. He smudged the studio windows while gazing forlornly down at the farmhouse where another Dougie lived, a female lab-collie mix even older than himself. Whenever I spread images and index cards over the floor to brainstorm new work, he’d promptly plant his backside on top. He’s one of the few family members I’ve yet to write about and he seems to be feeling the slight. And whenever I muttered a few pathetic sentences aloud—I’m a murmuring writer—he would expel such great heaving sighs that I imagined this is what it might have been like to share a creative writing workshop with the late Christopher Hitchens.

If you’re waiting for some happy-clappy, I apologize. There ain’t no epiphany in this rambling post. My divine muse didn’t show up at the eleventh hour from whatever bender she’s been (and still is) on to propel me to the desk engorged with creative ardor. It’s easy to succumb to melodrama when you’re on your own but its hard to sustain if the dog looks sceptical. I hit (and sometimes succeeded) those tragically low word counts by writing disjointed sentences that now languish in files on my lap top that I haven’t found the grit to re-open. On the last morning I piled my junk and his furry nibs in the car and drove home. For crying out loud, I thought, it’s a job like any other— if you ignore the lack of benefits and pay. I decided in pedantic fashion (thanks, Mum)—without locating my chakras, calling a therapist, stripping naked to holler at the dawn, or traversing the West Highland Way on my knees—that I would stay on this, the path less chosen, not only because I’ve no idea what the heck else I’m fit for, but because I’ve yet to come up with a better way to navigate this extraordinary, heartbreaking strait we call life. True, the poetry and music helped, yet I think it was the sheep, the rain, the trees, and the hare, that saved me. To quote the too oft-quoted “The Peace of Wild Things” by Wendell Berry:

When despair grows in me
and I wake in the night at the least sound
in fear of what my life and my children’s lives may be,
I go and lie down where the wood drake
rests in his beauty on the water, and the great heron feeds.
I come into the peace of wild things
who do not tax their lives with forethought
of grief. I come into the presence of still water.
And I feel above me the day-blind stars
waiting with their light. For a time
I rest in the grace of the world, and am free.

My (un)creative interlude did reiterate in concrete terms something that I recently heard articulated so well by Ta-Nehisi Coats, that this entire process is about failure—of bloody-minded perseverance in the face of impossible odds. And that I am (we all are) running out of time, and if you’re running of time, you can’t spend too long doddering at a fork in the road. If you can’t be with the one you love—the old song goes—love the one you’re with. Similarly, if you can’t write what you yearn to write, you write what you can. Like this, for example.