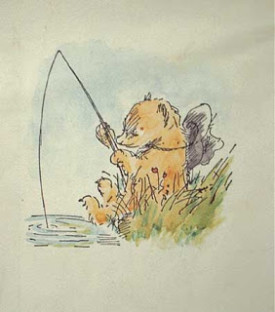 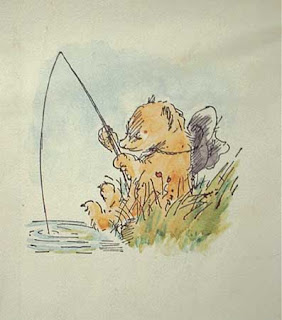 Just over 50 years ago, Michael Bond introduced lucky children (and adults) to A Bear Called Paddington, the bear from Darkest Peru, who had been found sitting on a battered suitcase in the London railway station. Having stowed away in a lifeboat at the urging of his Aunt Lucy (now in a retirement home for bears), Paddington was swiftly adopted by Mr. and Mrs. Brown of 32 Windsor Gardens, and became sibling to Jonathon and Judy, and fast friends with local antique dealer Mr. Gruber, with whom he shared ‘elevenses.’ As a child, I fell in love with Paddington through Bond’s easy prose, delightfully illustrated by Peggy Fortnum, and then through the animated series televised by the BBC (episodes available via You-Tube)

To celebrate Paddington’s 50th birthday, Bond has released Paddington Here and Now, describing our duffle-coated hero’s latest entanglements with the British Immigration department and the Highway Code. Illustrator R. W. Alley, ably carries the torch lit by Fortnum, and I’m happy to report that Paddington has lost none of his gullible optimism or moral certitude, nor his vulnerability to sticky situations and his fondness for marmalade and hats.